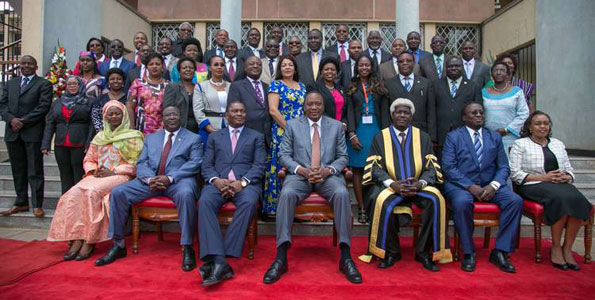 Nairobi U (HAN) October 14, 2015 – Public Diplomacy Regional Security New. President Uhuru Kenyatta has asked the East African Legislative Assembly (EALA) to hasten legislation of the Common Market Protocol. He said the legislation will accelerate regional integration and anchor the free movement of people, goods, capital and services within the region.  “We must allow our people to take their skills wherever they will be best rewarded. Why confine the energy and innovation of our young people to the countries of their parents?” President Kenyatta posed.

Mr Kenyatta emphasized that the ultimate goal of political union will not be achieved if people are not allowed to move freely across the region.

He was speaking on Wednesday when he addressed EALA at Parliament Buildings in Nairobi.

He commended EALA members for the work that has already gone into making the Common Market Protocol a reality but expressed the need for the process to be concluded during the current term of EALA.

He said leaders must create laws, institutions and framework that will help region face the future together, adding that Kenya will play its part in that great task.

To entrench the region’s integration, President Kenyatta expressed the need to communicate the benefits of the union to the people.

“Too often, the integration of East Africa is taken to be merely a political matter – a job for politicians, not ordinary people,” President Kenyatta noted.

He added: “Some might say that this is not really a problem, for integration will be quicker if we leave it to the authorities.  But they are wrong.  We can avoid division by giving East African citizens a more direct say in the task of integration.”

The President expressed satisfaction that there was rapid progress in the region’s joint infrastructure projects.

He cited the signing of agreements for the Standard Gauge Railway, witnessed by regional leaders, and the commissioning of the Taveta-Arusha road as examples of the joint projects.

“These projects are representative of the hard work that has gone into knitting the nations of the community together by road, rail and air. The rewards are already apparent: we see shorter travel times, and more investment in the region,” he said.

Mr Kenyatta promised to support EALA for the introduction of direct funding of the assembly to enable it carry out its mandate effectively.

“Direct funding would strengthen the capacity of the community to deliver its mandate.  It would also hasten the day of complete. TEA