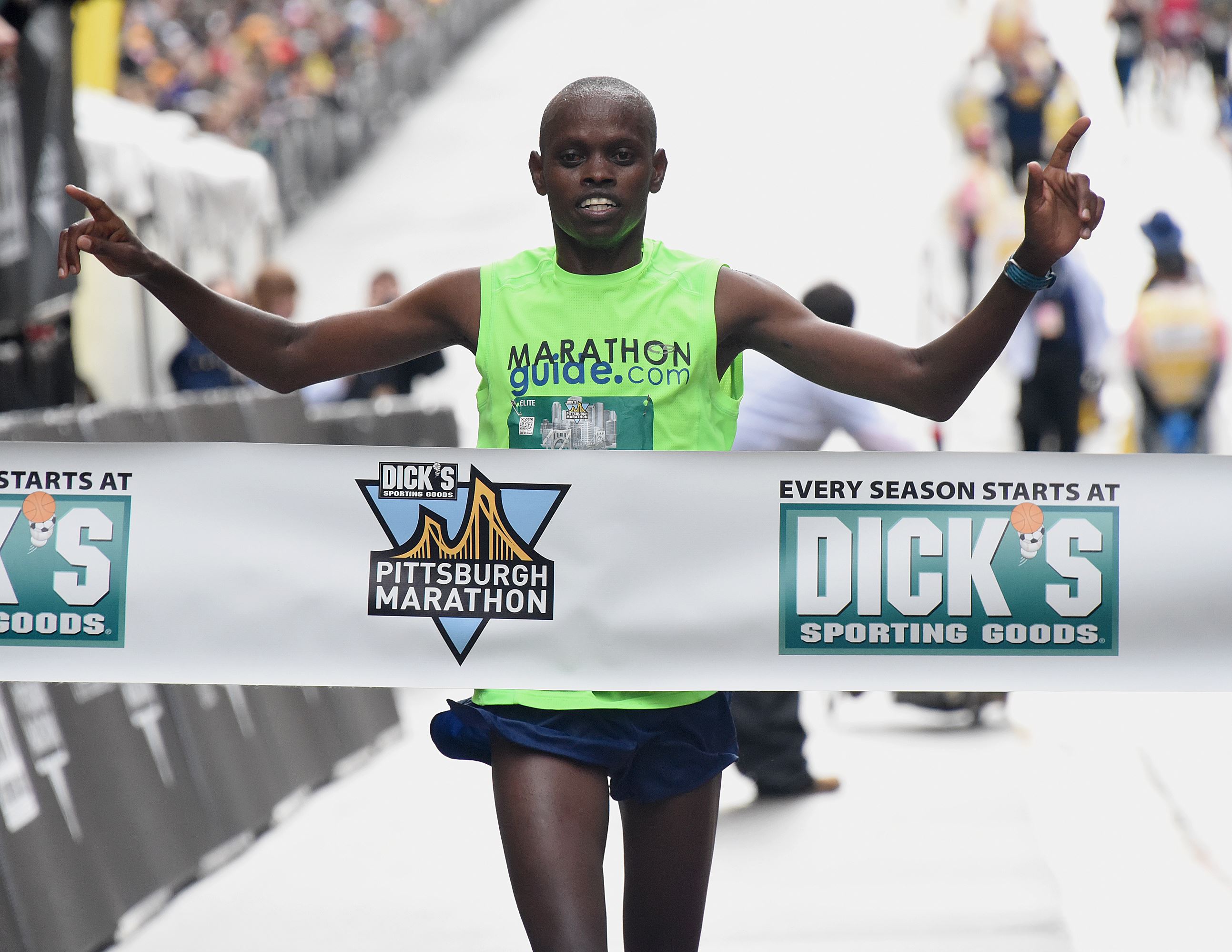 Hailemaryam Ayantu Dakebo of Ethiopa is the women’s champion of the full marathon, crossing the finish line at 2:39.19.

Cyclist Kenneth Bestine, 49, an athlete with Pittsburgh’s SteelWheelers, was in his first full race since recovering from a broken arm and finished first in the wheel division at 1:25:59. It was slow-going on wheels because of the wet conditions, he said.

“It was a little bit windy, breezy and slick in places so I ran on low air pressure on my tires to make sure I had good grip,” he said.

“About a year and a half ago I had wreck in a race and broke my arm,” he said, showing the scar near his right elbow. “So this is my first event back that I can go hard and I’ve been training pretty hard, and it’s starting to come back together. I’m 50 this year, so I’m not peaking by any means, so this was nice.”

Attila Domos of Pittsburgh and Marshall Tempest were second and third, respectively. The first female finisher in the wheel division was Ashli Molinero at 1:29.25.

The first woman in the half-marathon was Etaferahu Temesgen, 26, of Ethiopia in 1:13:08, followed by Kenyan Susan Jerotich (1:14) and Serena Burla (1:14:47) of Maryland. The winner, speaking through an interpreter, said the cool weather meant she felt tight during the last mile but otherwise enjoyed the course.

For Burla, 33, a mother and cancer survivor who trains in Maryland, the cool weather meant a nice day for a run.

“A couple of neighborhoods were really rowdy, and I got every bit of joy out of that,” she said. “I heard good things about the city of Pittsburgh, and it didn’t disappoint.”

Julius Kogo, Kimutai Cheruiyot and Nelson Oyugi, all nationals of Kenya, finished one-two in the men’s half-marathon. Kogo finished at 1:03.13, behind his Pittsburgh Marathon record from 2013, and Cheruiyot, the winner last year, was at 1:03.29. Oyugi came in at 1:05.03.

The first American was sixth overall.