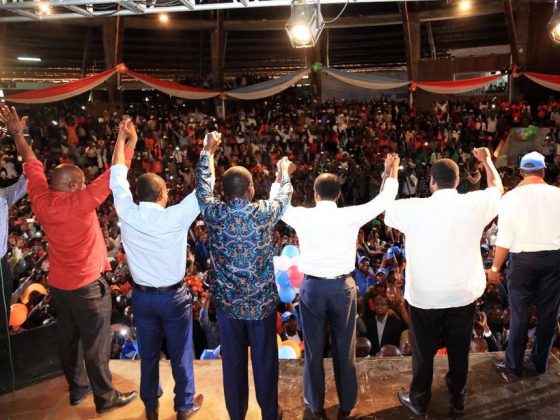 NAIROBI (HAN) January 12.2017 Public Diplomacy & Regional Security News.By FRED OLUOCH. Kenya’s opposition has shelved plans to call for street protests against the government-sponsored amendments of the electoral laws, a move that could rally confidence in the economy ahead of the August 8 polls.

Instead, the opposition said it would galvanise its support to register as voters in an exercise that begins on January 16 with a view to kick President Uhuru Kenyatta’s government out of office through the ballot.

“Our mass action will now become mass voter registration. We ask our supporters to go out and register,” Ford Kenya’s Moses Wetang’ula said.

The opposition that is mobilising for a super alliance ahead of the elections had raised expectations that it would name its joint candidate during Wednesday talks held at the Bomas of Kenya in Nairobi. It did not do so as it said discussions were ongoing.

However, Raila Odinga, Kalonzo Musyoka and Mr Wetang’ula of the Coalition for Reforms and Democracy (Cord); Musalia Mudavadi of Amani National Congress (ANC); and Nick Salat of Kanu, signed the resolutions committing themselves to opposition unity.

The leaders, in their resolutions read by Senator James Orengo, said they are committed to the opposition unity and that they will employ all legitimate means to ensure that they overturn the recent changes to the Election Laws (Amendment) Act, 2016.

President Uhuru Kenyatta had on Monday evening assented to the controversial law despite appeals by the opposition to delay the signing to allow further consultations.