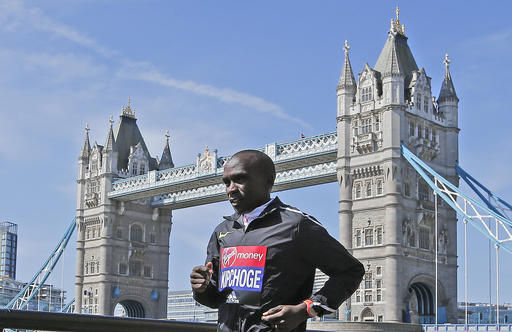 LONDON (HAN) April 20, 2016. Public Diplomacy & Regional Security News.  Defending the integrity of athletics ahead of Sunday’s London Marathon, Kenyan runners insisted Wednesday that they run clean and don’t need to resort to doping in the pursuit of glory.

“It’s a noble sport,” Eliud Kipchoge said as he prepares to defend his London title on Sunday. “We are really working hard in training and I can assure the general public that we are really clean as athletes. That’s why we love this sport and what actually is driving us to run very well is the love of sport.

“People are really clean and working hard. I invite you guys to Kenya. Come to our training camps.”

Kenyan officials have been in a sprint of their own to avoid the country being declared non-complaint by the World Anti-Doping Agency if improvements aren’t made by May 2.

Forty Kenyans have been banned for doping since the 2012 Olympics in London. And WADA demanded that Kenya strengthen its overall anti-doping program after the surge in doping cases and allegations of extortion and cover-ups by top track federation officials.

IAAF President Sebastian Coe had warned that Kenya could join Russia in being banned from international competitions by track and field’s governing body. But Kenyan lawmakers this week passed a law criminalizing doping, one of WADA’s key demands.

“The president has signed and it’s the law,” Kipchoge said. “That’s what WADA was waiting for in Kenya. So we are safe.”

In Sunday’s 36th London Marathon, the Kenyans are hoping there is no backlash against them from race-watchers given the focus on doping scandals in recent months.

“There’s a wrong perception,” said Wilson Kipsang, who won the 2012 and 2014 London Marathons. “Sport is not special or unlike any other activity, it’s just like crime. You find a society where there are one or two criminals, that doesn’t mean that the whole society are criminals. Just like in sport, doping or cheat is a crime, yes, but that doesn’t mean all athletes, all sport is rotten.

Before they answered questions about the integrity of athletics and the damage caused by doping scandals, an irritated London Marathon official had interjected.

“There’s an undue focus about athletics,” said news conference host Tim Hutchings, a British middle and long-distance runner turned broadcaster who has been calling marathons in the United States for NBC.

“There’s a gross over-perception,” added Hutchings, “an inaccurate perception about that problem against Kenyan distance-runners.”