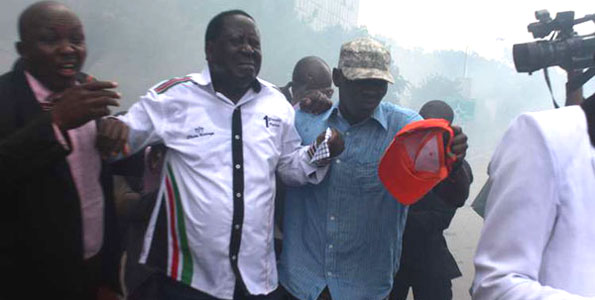 NAIROBI (HAN) April 30. 2016. Public Diplomacy & Regional Security News. Kenya’s electoral commission has come under pressure from the main opposition coalition, the clergy and the lawyers’ association, to step down over allegations of impartiality and graft against some members.

An attempt by the Coalition for Reforms and Democracy (Cord), led by Raila Odinga, to storm the offices of the Independent Electoral and Boundaries Commission (IEBC) was halted by police and has been roundly condemned by the ruling Jubilee coalition.

A court has issued orders restraining Mr Odinga and his team from storming the IEBC.

According to Cord, IEBC’s rejection of the opposition’s call for a referendum to amend sections of the Constitution was influenced by the ruling coalition. The IEBC has denied the allegation and said Cord did not raise the required one million signatures. It rejected about half of the 1.6 million names and signatures submitted.

The Roman Catholic and Protestant clerics, the Law Society of Kenya and the Kenya National Commission on Human Rights had in the past three weeks separately issued hard hitting statements, saying that IEBC had to be reconstituted.

But the IEBC hit back, saying they had reformed and could no longer be blamed for what happened in the March 2013 General Election.

“It is not true to say the commission has not addressed concerns such as the results transmission system. It will be in the best interest of the country if all actors supported the IEBC in implementation of the elections operations plan,” the commission’s communication manager Andrew Limo said in a statement.

Nzamba Kitonga, former chairman of the Committee of Experts that drafted the Kenyan 2010 Constitution, told The EastAfrican that though the accusations were a stain on their credibility, the IEBC commissioners were not bound to leave office due to the demonstrations.

“It is really about IEBC saying whether morally it will be right for them to go for elections where one party has expressly said they do not trust them to conduct it fairly,” said Mr Kitonga.

Mr Odinga, his co-principals Moses Wetang’ula and Kalonzo Musyoka on Monday April 25 led hundreds of their supporters to Anniversary Towers in Nairobi where the commission’s offices are located to pressure the IEBC commissioners to resign to make way for a new team to manage the August 2017 General Election.

On Friday, they announced that they will camp at the offices on Monday, May 9 and subsequent Mondays until the commissioners quit.

The terms of the eight IEBC commissioners and their chairman Issack Hassan end in November. The commissioners have a constitutional six-year-term, which is not renewable.

Prof James ole Kiyiapi, a March 2013 presidential candidate, said that the commission must be disbanded.

Prof Kiyiapi said the only way to inspire confidence was to overhaul the voter registration, the vote transmission system and the announcement of results.

Constitutional lawyer Charles Kanjama was categorical that for IEBC to perform, it must remain independent from the influence of political parties.

However, he argued that from the complaints by Cord, IEBC was obliged to consider exiting.

“If the IEBC loses the confidence of a key player in the electoral process, can they conduct an acceptable process?” asked Mr Kanjama in a TV interview on Thursday.

University of Nairobi political scientist Adams Oloo said that the accusations against electoral commissions in East Africa arose because the electoral systems were flawed and the whole system biased.

“The big problem in East Africa is that the opposition still live in a fallacy that we have non-partisan electoral teams who cannot be manipulated and who do not have preferred candidates in a presidential race,” said Dr Oloo.

Dr Oloo proposes that the solution is to have political parties propose names for people to be nominated to the agencies.

“Once you have a person a party nominated to an electoral agency and the same team pronounces results that you have lost, the chances of you accepting those results are very high,” said Dr Oloo.