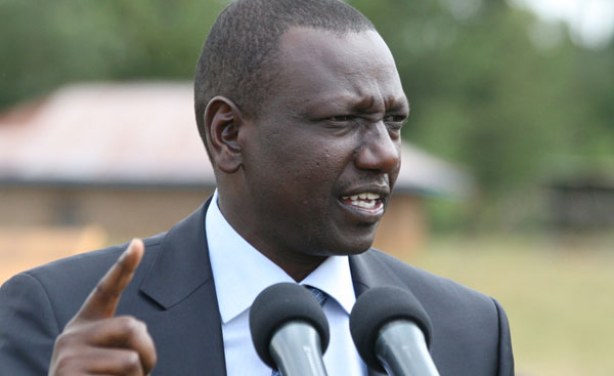 Homophobia is on the rise across much of Africa and remains illegal in many countries, including Kenya where it was outlawed under British colonial legislation.

“We will not allow homosexuality in our society as it violates our religious and cultural beliefs,” Ruto was quoted as telling a cheering congregation at the Jesus Winner Ministry Church on the outskirts of the capital.

“We will stand with religious leaders to defend our faith and our beliefs,” he said. “There’s no room for homosexuality in this country. That one I can assure you.”

Ruto’s comments came on the day U.S. Secretary of State John Kerry arrived in Kenya promising to push human rights, alongside discussions on security and terrorism.

Ruto, who is on trial at the International Criminal in The Hague accused of crimes against humanity, said his stance was about morality not politics.

“When we say this, we are not saying so as to get votes but to protect what we all believe is right,” he said, according to The Star newspaper.

In conservative Christian and Muslim countries in Africa, homophobia is a vote-winner.

In Uganda legislators sought the death penalty for homosexuality and although the anti-gay bill has since been watered down, ruling party MPs remain eager to see it passed.

Homosexuality is illegal in 36 out of 54 African countries and punishable by death in four, according to human rights group Amnesty International.

In Kenya, too, a cross-party parliamentary group is seeking stricter application of existing anti-gay legislation.

“Our Deputy President Ruto is building himself to be the most dangerous man in Africa. If his strategy works much will burn,” Wainaina told his 18,000 followers on Twitter.

The Jesus Winner Ministry Church specialises in prophecies and describes itself on its website as “an oasis” for people “under the yoke of curses, witchcraft, stagnation, ancestral spirits and other evils brought by Satan.” It is popular with Kenya’s political elite. Dailystar