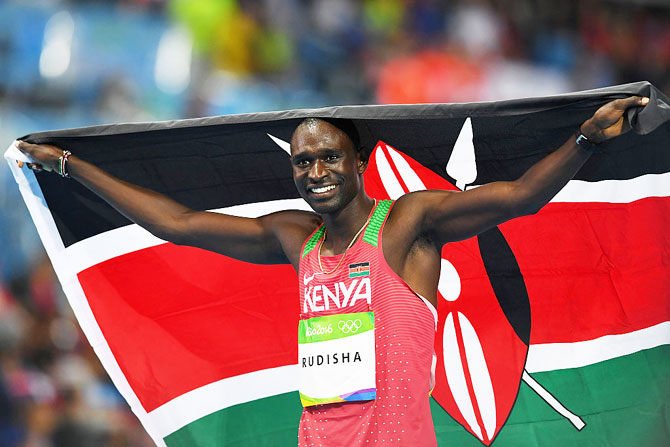 Rudisha, also the world champion and world record holder, timed a season’s best of 1min 42.15sec to become the first man in 52 years to defend the 800m title.

There was a rip-roaring start to the race when Rudisha’s teammate Alfred Kipketer shot out to the front, hitting the first 200m in an eye-watering 23.2 seconds.

Rudisha, deprived of his usual gun-to-tape approach to racing the two-lap race, sat in second as Kipketer shot off like a pacemaker.

2014 world U20 champion Kipketer hit the bell in 49.23sec, Rudisha moving to his shoulder and eventually into the lead with 300 metres to run.

Rudisha’s surge took Bosse and Makhloufi with him, but as the trio entered the home stretch of the Olympic Stadium, it was clear there would be only one winner.

Rudisha, who produced the run of the London Games in 2012 to win gold in a world record of 1:40.91, roared through the line to claim his second Olympic gold, Makhloufi outsprinting Bosse, who eased up too early to allow Murphy in for an unexpected bronze.