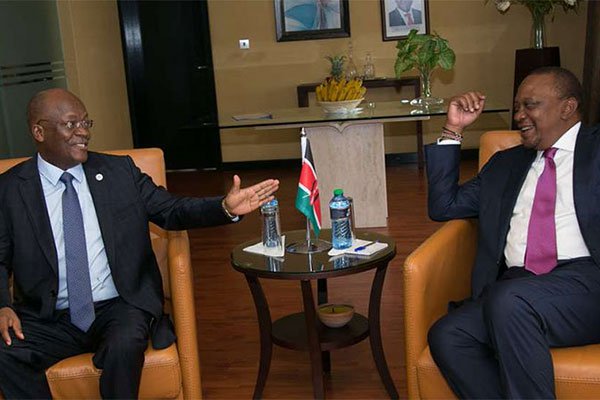 Kenyans took to social media this week to lament trade discrepancies with Tanzania.

The #fairTradeKe trended top most of Monday on Twitter after the Nation published a story detailing a raft of trade barriers placed on Kenyan goods seeking market in Tanzania.

Those who contributed to the debate decried the silence from Kenyan authorities saying traders from Tanzania enjoy favourable cross-border trade.

“We should build a wall along the border with Tanzania! I think this is the best time for Kenyans to wake up on the four agendas. Promote trade and manufacturing within. #fairTradeKe,” a Ruth (@Agribusiness 360) tweeted.

Others called for Kenyan authorities to hit back by increasing tariffs on Tanzanian goods arguing that local manufacturers had been prevented from exporting to the Tanzanian market through dissuasive tariffs.

Some claimed that vehicles bearing Kenyan number plates are targeted by police in Tanzania forcing traders to hire Tanzanian cars for smooth transportation.

“Hostility within the East African Community is metered out to Kenyans mainly by Tanzania. Even if Tanzania is claiming to protect its citizens from better economies, there is no need of violating the rights of Kenyan citizens living in Tanzania,” wrote Victor Mochere.

Tanzania and Kenya have been engaged in periodic trade tiffs especially over sugar and tobacco.

In the latest one, Tanzania declined to grant Kenyan confectionery duty-free access to its market last year even after a verification exercise was conducted to determine the source of the industrial sugar used by the manufacturers.

Dar maintains that the duty-free sugar imported by Kenya in August 2017 still has an impact on locally-manufactured goods.

Both Tanzania and Uganda had slapped a 25 percent import duty on the Kenyan goods but Kampala lifted the tariff after the verification mission.

The matter remains unresolved after Tanzania requested for a second verification which Kenya rejected.

Kenya and Tanzania are also locked in a tobacco trade war, where Nairobi is protesting Dar’s decision to impose 80 percent higher excise duty on cigarette transfers into Tanzania, despite the raw materials being sourced in Kenya.

A number of challenges, mostly those compounded by protectionist policies, however continue to hinder EAC intra-trade.

In 2018, the EAC intra-trade stood at only 20 per cent as opposed to 46 per cent of the Southern African Development Community, and 67 per cent in the European Union.