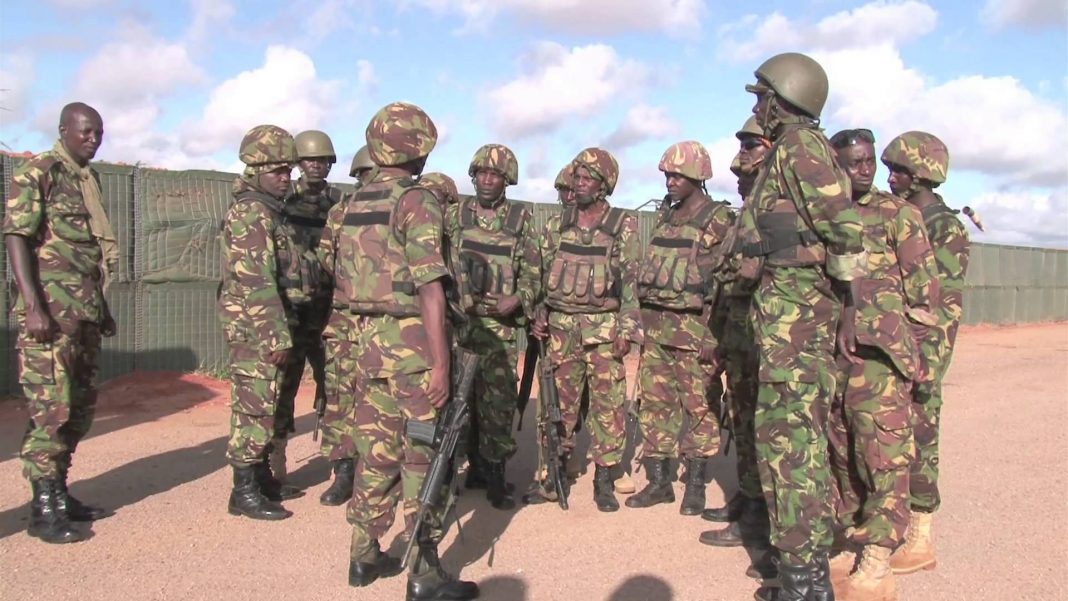 Kenyan troops in Somalia were Friday engaged in a massive counter offensive against Al-Shabaab – on land and air – just hours after a deadly attack on their base by the Somalia-based terrorists.

Al-Shabaab attacked a KDF camp at Kolbiyow, 18km from the Kenyan border, at about 5am, the military spokesman, Lt-Col Paul Njuguna, said.

The base hosted Kenyan soldiers working under Amisom in the Lower Juba.

It had personnel from various units but the core group comprised soldiers from the Nyali-based 15 KR Infantry Battalion.

Other supporting units were engineers, doctors and gunners from heavy artillery battalions.

Cord leader Raila Odinga, who has in the past called for Kenyan troops to be pulled out of Somalia, condemned the attack, calling it “unacceptable”.

According to a statement that Lt-Col Njuguna posted on the KDF Twitter handle, the terrorists tried to attack the camp “using a suicide vehicle-borne improvised explosive devise” but were repulsed by the Kenyan soldiers.

He said “scores” of the terrorists were killed but declined to divulge more information on losses incurred by KDF troops.

“KDF soldiers remain vigilant and will continue to relentlessly pursue the terrorists to ensure peace and security of our country Kenya as well as support Amisom operations in order to stabilise Somalia,” Lt Col Njuguna said.

The soldiers also received reinforcement from air and land forces.

SUICIDE BOMBERS
Sources told Saturday Nation that “the vehicle-borne device” — basically a bomb on wheels — exploded before attackers who were on foot marched towards the Forward Operation Base from different directions.

The attackers were backed by others riding on pick-up trucks mounted with machine guns.

The raid was similar to the El-Adde attack in that it occurred before daybreak, was initiated with vehicle-borne bomb and there were casualties on both sides.
In both attacks, fighting went on for hours.

KDF has never released either the names or numbers of soldiers who died, those who were taken as prisoners, the survivors or those who went missing in action.

Unlike El-Adde, however, communication and command was not lost during the hours of fighting on Friday morning.

The Saturday Nation established that the officer in charge of the base was in communication with top commanders in Nairobi throughout, relaying information and receiving orders.

A preliminary report indicated that KDF incurred the first casualties after the explosives-rigged vehicle exploded.

The explosion was followed by suicide bombers and fighters on foot who attacked in waves.

Other attackers were riding on technicals — the pick-up trucks mounted with machine guns.

There were unconfirmed reports of a military-grade armoured personnel carrier being among the vehicles used by Al-Shabaab.

“The information being peddled by terrorists on social media is false and part of their propaganda,” he said. Al-Shabaab had claimed that 57 soldiers had been killed in the raid.

WEAPONS SEIZED
Top military commanders held a meeting at the KDF headquarters at dawn and subsequent briefings were planned for the entire.

Lt Col Njuguna pledged to give more details about the attack but had not done so by the time of going to press.

When the Saturday Nation called Defence headquarters last evening, we were requested to call back today.

Earlier in the day, he had said two bombs, eight AK-47 assault rifles, loads of live ammunition, parts of explosive devices and other Al-Shabaab paraphernalia were seized from the battle filed.

Al-Shabaab had occupied the area after a tactical withdrawal of KDF troops in January last year.

The Voice of America and wire news agencies reported that the terrorists drove a truck filled with explosives and detonated them inside the base.

This was followed by heavy gunfire and an infantry attack.

According to him, the terrorists had seized weapons and military vehicles, Reuters reported.
Col Njuguna described these claims as false.

“Our soldiers repulsed the terrorists,” he said.

STABLE GOVERNMENT
He said the Kenya Air Force had joined the land forces in what he described as “an intensive pacification operation” in the border town.

Kenyan soldiers are fighting the terrorists as part of a UN-backed African Union Mission in Somalia (Amisom).

Besides Kenya, Al-Shabaab has attacked camps belonging to Uganda, Burundi and Ethiopia, with Uganda and Burundi suffering massive causalities.

Over the last two years, the terrorists have rampaged through bases manned by Burundian soldiers in Lego, Ugandan troops in Janale and Kenyan soldiers in El-Adde, inflicting high casualties and stealing military equipment each time.

The Kolbiyow raid is the second major attack this week in Somalia, coming three days after 28 people were killed when Al-Shabaab bombers and fighters attacked a hotel in the capital.

Somalia is due to hold a presidential vote in early February, signalling the end of a drawn-out electoral process in which a new parliament has also been selected.

Political infighting and ongoing insecurity frustrated plans for a universal vote in 2016, with lawmakers elected by specially selected delegates.

Somalia has not had an effective central government since the 1991 overthrow of president Siad Barre’s military regime, which ushered in more than two decades of anarchy and conflict in a country deeply divided along clan lines.

Additional reporting by Reuters and AFP