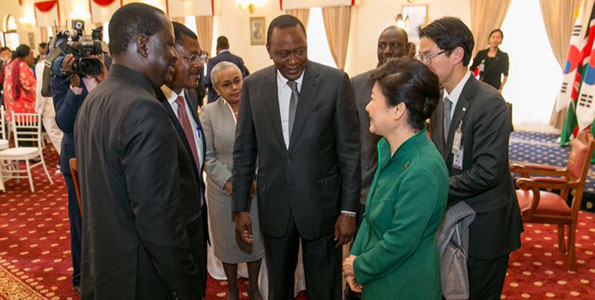 Odinga earlier Tuesday excused himself from a burial in Narok in the Rift Valley, telling the mourners that he had received a call to meet President Kenyatta at 2pm (+3GMT) at State House.

“I just got a call from State House for a meeting with President Uhuru Kenyatta. I request your permission as the people of Narok to go and talk to him. I will announce to Kenyans if we agree, and we if don’t, I will also let you know,” Odinga said.

According to Odinga, the meeting is meant to address some of the issues raised by Cord, top among them its position on the Independent Electoral and Boundaries Commission (IEBC).

Odinga had just arrived in a chopper for the burial when he requested to be excused. He was attending the funeral of the wife of the first post-independence senate member, Philip Lemein in Motonyi Village, Narok North Sub-County.

Kenya has been on the edge lately over the the opposition’s demand that the Independent Electoral and Boundaries Commission (IEBC) be disbanded ahead of the 2017 General Election.

The opposition says IEBC is incapable of presiding over a free and fair poll.

There has also been tension over the opposition’s plan to hold a parallel Madaraka (independence) Day rally at Nairobi’s Uhuru Park.

President Kenyatta is scheduled to preside over the Wednesday celebrations in Nakuru, about 150km west of Nairobi.