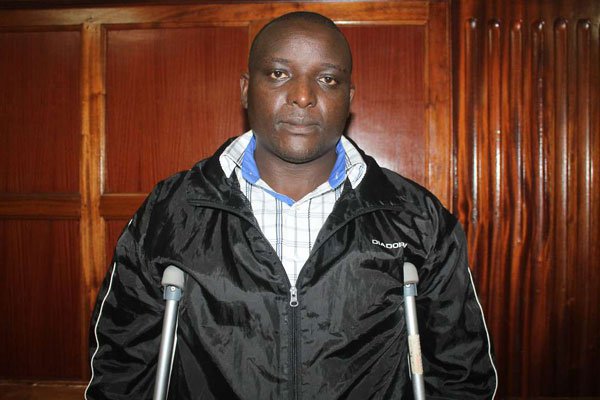 A Nairobi court has sentenced a former senior police officer to death for the murder of a suspect in his custody.

The sentence, one of the harshest punishments over widespread police brutality in Kenya, was handed down on Thursday after the High Court found former Ruaraka Police Station boss Mr Nahashon Mutua guilty of killing Mr Martin Koome in 2013.

Mr Koome had been arrested over a domestic brawl at his home in Baba Dogo, a suburb northeast of Nairobi city centre, but later died after being tortured while in a police cell in December 2013.

Evidence showed that Mr Koome was assaulted using a metal pipe and his head immersed in a drum of water.

He was later taken to the national referral Kenyatta National Hospital but died hours later.

Activists have long accused Kenyan police of using excessive force with little risk of being charged or convicted. A police oversight authority set up in 2011 ended virtual police impunity and fostered prosecutions for abuses.

A Mr Kelvin Odhiambo had initially been charged with murder but a complaint was filed at Independent Policing Oversight Authority (Ipoa).

After the Ipoa investigation, it was discovered that the charge was a cover-up to save Mr Mutua’s skin.

Mr Odhiambo’s case was then terminated by the Director of Public Prosecutions about nine months later and Mr Mutua was charged with the murder.

The court also heard that Mr Mutua interfered with the investigations by intimidating and coercing witnesses who had recorded statements with Ipoa.

He was also accused of giving a misleading crime and incident report that Mr Koome had been assaulted by Mr Odhiambo.

“The evidence against Nahashon Mutua was overwhelming. The deceased suffered a lot of pain when he was assaulted by the officers,” High Court Judge Martha Mutuku said in her brief ruling. “This court has no other option but to sentence (him) to death since he is the one who committed the crime.”

Other officers in the station were not investigated by the IPOA in the Koome case.

Mr Mutua has 14 days to appeal against the conviction.

Ipoa, established in 2011 after police killed hundreds of Kenyans during post-election unrest in 2007, can investigate police on its own initiative or after receiving a public complaint.

“This milestone decision (on Mutua) reiterates Ipoa’s commitment to professionalise the National Police Service through holding to account culpable officers and exonerating those who are falsely accused,” Ipoa said in a statement.

Death sentences are not unusual in Kenya but they are generally commuted to life imprisonment. No executions have been carried out since 1987.

Two other policemen were sentenced to death by the High Court last November for murdering a fellow officer and two civilians in a Nairobi bar in 2014.

Separately, an inquest court in the western city of Kisumu said on Thursday that 36 police officers should be held liable for the 2017 death of a six-month old baby, Pendo, and called for criminal proceedings to begin.

The baby’s parents said the infant was teargassed and clubbed by police who invaded their home in Kisumu hunting for protesters after a disputed presidential election in August.