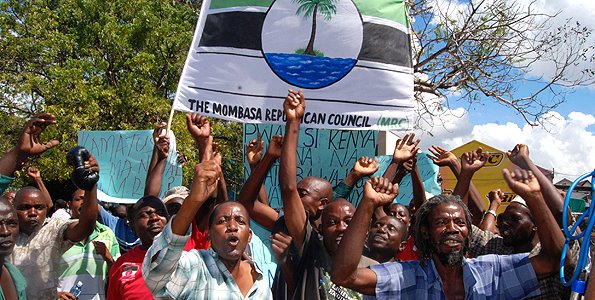 MOMBASA (HAN) June 2.2016. Public Diplomacy & Regional Security News. By Joseph Akwiri. A court in Kenya’s port city of Mombasa released 43 men on Thursday who had been charged with being members of a group that seeks the independence of the Coast region from the hinterland.

The Mombasa Republican Council (MRC) accuses the government of decades of social and economic marginalisation of the Coast region, and wants it to secede and form its own government.

The 43 were arrested in 2014, in Kilifi, north of Mombasa, for stepping up the activities of the movement. Authorities say this involved attacks on police and polling stations, and killing security personnel and individuals perceived to be non-natives.

In a government crackdown, the movement’s top leaders and supporters were arrested and charged with offences including murder and being members of an outlawed group.

The MRC denied involvement in all the incidents.

Magistrate Irene Ruguru said in her ruling that the prosecution had failed to provide enough evidence to sustain the convictions of the 43.

“Since they were arrested, no witnesses have been arraigned to testify against them,” said Ruguru.

Although activities of the group have subsided since the crackdown, police and officials say they are keeping up close surveillance as Kenya nears a general election in 2017.

“We are alert to the fact they may start regrouping and recruiting as we near the elections, because this is the season they like to take advantage of,” Joseph Keter, Kilifi County commissioner, said during national day celebrations on Wednesday.

The MRC secretary general Randu Nzai said the release of the 43 had proven the group had been unfairly targeted by government.

“We are happy that the truth is finally setting our people free. We have never advocated or engaged in any violence,” Nzai, told Reuters on telephone.