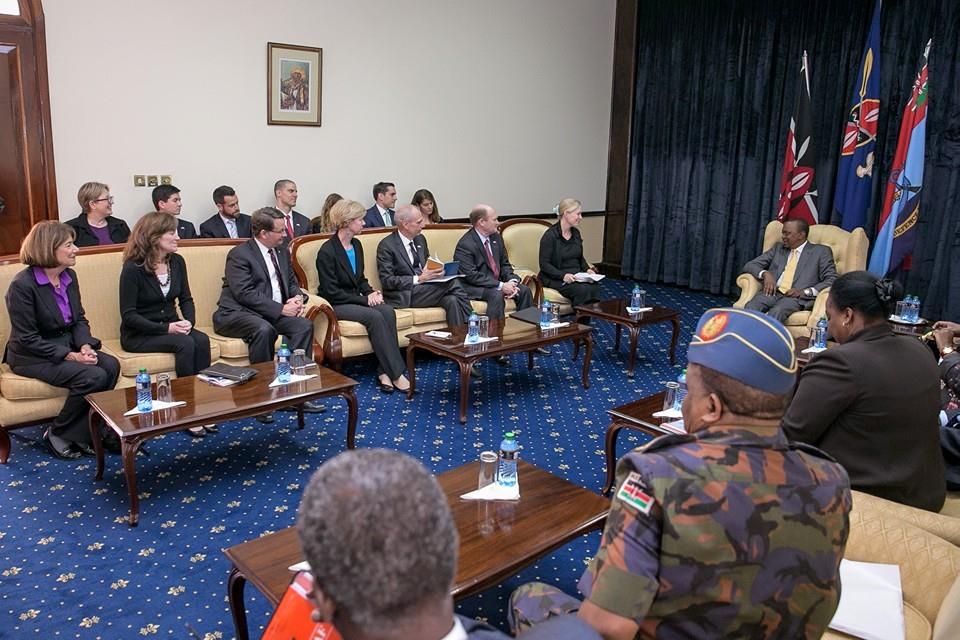 Nairobi (HAN) April 14, 2015 – Public Diplomacy, Regional defense and Maritime security News.   The Kenyan President Uhuru held a meeting with a delegation of the US Senate and US Congress led by New York Senator, Kirsten Gillibrand at State House, Nairobi.

This is a global war that requires a global approach. We are working very closely with our partners, including the United States, in tackling terrorism in the region and beyond.

Uhuru also briefed the delegation on our efforts to deal with and stop terror financing. We also discussed the need for capacity building for Kenyan security agencies in the war against terror, an area where the United States is keen in supporting Kenya.

Opinion By Ostrich Ya Murage: The Solutions to Insecurity are here. First Create a control room with Big screen with connections to every Police station in every Conner of this country. Issue Alarm Gadgets to Every OCPD so that by press of Button The big screen will show Which part of the Country has a Security issue. Then Set a Base with Stand by Recce Squad Police and with High speed fighter Jet or Choppers that can Only take 2 Min from Nairobi to Garrisa. Third Set Tough Insecurity laws that if any Politician or Individual is suspected to have financed Terrorism Death Penalty or Execution without further aguement PERIOD Mr presi.