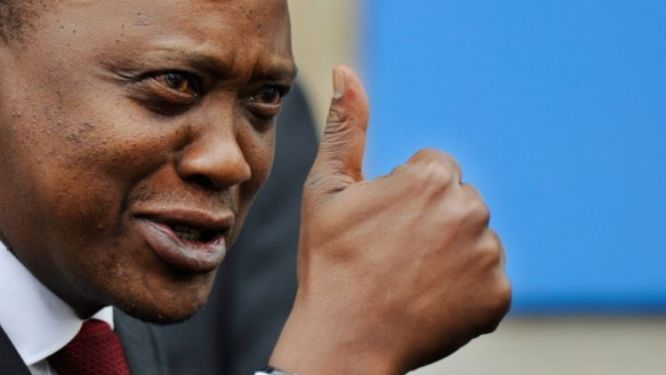 Kenya is stuck in a dangerous limbo as President Uhuru Kenyatta takes an unassailable lead in a disputed poll that has sparked violent protests in which eight have died so far.

According to verified and official results on the electoral commission’s public portal, Mr Kenyatta was on Saturday leading with over 98 percent of votes.

His arch-rival Raila Odinga, who pulled out of the repeat poll citing refusal by the electoral commission to create a level playing ground, had received 19, 568 votes.

The rest of the six candidates had managed less than 10,000 votes each.

The Independent Electoral and Boundaries Commission (IEBC) put the turnout in the 76 constituencies at 45.47 per cent.

However, the turnout appears to be headed for a record low, putting into question the credibility of the election that has deeply polarised the country.

Violent protests have rocked Mr Odinga’s strongholds in the west of the country and flashpoint Nairobi slums, with the death of man in Homa Bay late Friday taking the toll since election day to eight.

Scores have also been wounded, including police officers, many civilians by police bullets.

In Homa Bay, police on Friday shot and killed a man who was part of a gang that stormed the home of former Karachuonyo MP James Rege on claims that he was hiding ballot papers that were marked in favour of President Kenyatta.

Mr Victor Muga, 20, was shot dead while Mr Cleavance Odhiambo and Mr Samuel Jeremiah were injured when, together with other youth, attempted to raze down Mr Rege’s home in Pala Village.

Mr Rege, who did not defend his seat, was the lead campaigner of Mr Kenyatta in Nyanza in the August elections.

One man was also shot dead by police in Kawangware on Friday night as clashes broke out between ethnic groups over the election, police said.

A witness told AFP the violence started when a group of youths “started attacking people and questioning why people never voted”.

At least 40 people have now died since a first election on August 8 in Kenya’s worst crisis since a 2007 vote sparked politically driven ethnic violence that left over1,133 dead.

“From past experience, sporadic incidents of violence quickly burst into a conflagration with tragic consequences. We are likely to go this direction unless quick action is taken,” wrote the Nation in an editorial.

The presidential re-run was ordered by the Supreme Court after it overturned Kenyatta’s August 8 victory over “irregularities” in the transmission of votes.

But two weeks before the new elections, Mr Odinga pulled out, calling for a boycott on the grounds that the electoral commission hadn’t made the necessary changes to ensure a free and fair vote.

Observers expect further legal challenges over the re-run, with activist Okiya Omtatah having already filed a case at the Supreme Court.

In some areas, mostly in the western Nyanza region where the majority of deaths have occurred, the election couldn’t take place at all as opposition supporters blocked hundreds of polling stations from opening on Thursday.

Plans to restage elections in the region on Saturday were again delayed after election chief Wafula Chebukati said he feared for the safety of his staff.

Mr Chebukati saying a future date would be announced “in the coming days”.

According to the Supreme Court, the election re-run must be completed by October 31.

In Kisumu, Kenya’s third largest city where three people had died on election day, opposition supporters were still on alert to block plans to deploy election material, although shops opened and transport was circulating.

At a main roundabout in the city, someone had hung up a dead cat.

In recent days, ahead of each announcement, Mr Odinga promises to announce his next moves on how to “slay the cat”.

While the Supreme Court ruling was hailed as a chance to deepen democracy, the acrimonious bickering between Mr Odinga and Mr Kenyatta — whose fathers were rivals before them — has sharply divided a country where politics is already polarised along tribal lines.

“Leaders must now begin preaching the message of reconciliation and co-existence. Elections have deeply divided the people and we need to repair the fractures,” said the Nation editorial.

Odinga has vowed a campaign of “civil disobedience” and is demanding another new election be held within 90 days.

In an exclusive interview with CNN on Friday, the opposition leader said even if Mr Kenyatta wins, he will not have it easy time running East Africa’s biggest economy.