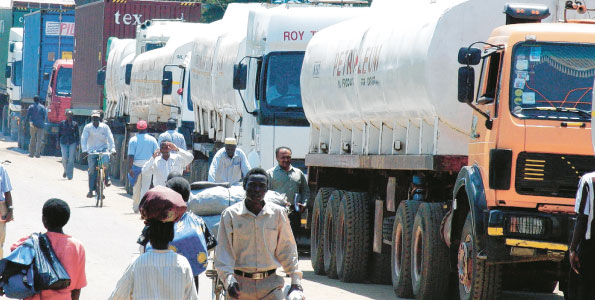 “By June 2016, goods moving along the northern corridor (Mombasa-Kigali) will be monitored in real time, curbing dumping, theft and other vices,” Uganda Revenue Authority (URA) said in an update.

The Electronic Cargo Tracking System (ECTS) comprises satellites, a monitoring centre and special electronic seals fitted on cargo containers and trucks, which give the precise location of goods in real time.

“On implementation, Kenya and Uganda will jointly attach electronic seals onto cargo at Mombasa. The implication is that goods cannot disappear in anyone’s territory. We will have rapid response teams to intervene swiftly,” URA Customs Commissioner, Dicksons Kateshumbwa said.

Besides curbing theft of cargo, the system also helps to seal loopholes that cause the states losses in revenue through suspected under-declaration of the value of exports.

“The new system’s key strength is that unlike presently, the three northern corridor countries, shall use one system and one platform, with seamless visibility from Mombasa to Kigali and eventually Juba,” Kenya Revenue Authority (KRA) commissioner-general John Njiraini said in January.

Kenya and Uganda have successfully piloted the ECTS while Rwanda has commenced trials and targets to fully adopt the system by mid this year. South Sudan is also expected to come on board soon following in the wake of its recent admission as the sixth member of the East African Community (EAC).

“The southern corridor (Dar-es-Salaam-Bujumbura) is expected to be monitored by a similar system,” said Mr Kateshumbwa.

Kenya introduced ECTS in July 2009 as it intensified its purge against dumping of transit goods in the local market.

The country is a key gateway to the region in that the Mombasa port handles imports such as fuel and consumer goods for Uganda, Burundi, Rwanda, South Sudan, the Democratic Republic of Congo and Somalia and exports of tea and coffee from the region.

All importers, exporters, clearing agents and transporters conveying goods under customs control are required to install the ECTS, phasing out tamper-prone seals.

Upon the installation of the ECTS equipment, the then cumbersome practices of customs physical escort were phased out and the annual transit goods licence fees waived.

In addition to customs, the system will also provide real time information on the location and status of the cargo to transporters and cargo owners or their agents as the goods are transported along the northern corridor.

“The system provides real time information on the location and status of the cargo to transporters and cargo owners or their agents as the goods are transported along the 1,200km journey from Mombasa to Kampala. Until now, one can only know the location by calling the driver,” Mr Kateshumbwa said.

Under the SCT deal that came into effect in 2014, clearing agents within the EAC have been granted rights to relocate and carry out their duties in any of the partner states as part of a strategy to improve flow of goods and curb dumping.