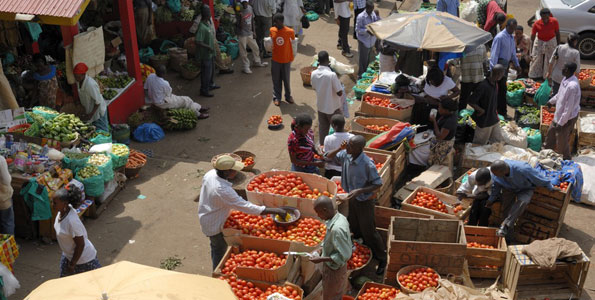 NAIROBI (HAN) April 30. 2016. Public Diplomacy & Regional Security News. Falling prices of food and fuel in Kenya and Uganda helped lower the cost of living in the month of April, statistics data from the two countries show.

Kenya’s year-on-year inflation dropped to 5.27 per cent in April from 6.45 per cent a month earlier, while in Uganda inflation eased to 5.1 per cent from 6.2 per cent in March.

Uganda’s annual core inflation, which excludes food, fuel, electricity and metered water declined to 6.4 per cent this month, from March’s 6.9 per cent.

The Uganda Bureau of Statistics cited a slowdown in food prices, energy and other utilities for the drop in the overall inflation.

Bank of Uganda cut its policy rate to 16 per cent earlier this month, citing a likelihood of both headline and core inflation hovering around 6.5 per cent in the first half of 2016, before declining to a medium term target of 5 per cent in first quarter 2017.

In Kenya, analysts forecast the fall in inflation could pave the way for an interest rate cut.

The rate of inflation has been falling steadily this year, after peaking at 8.01 per cent in December, and analysts said the latest reading might encourage policymakers to start easing rates.

Razia Khan, head of research for Africa at Standard Chartered, said April’s data opened “the way for the easing that we expect in Kenya”.

The central bank has held the benchmark lending rate at 11.5 per cent since last August.

“The clear standout inflation pressure is coming from food prices. This may have been a factor in the central bank wanting to proceed more cautiously with the start of an easing cycle any earlier,” Khan said.