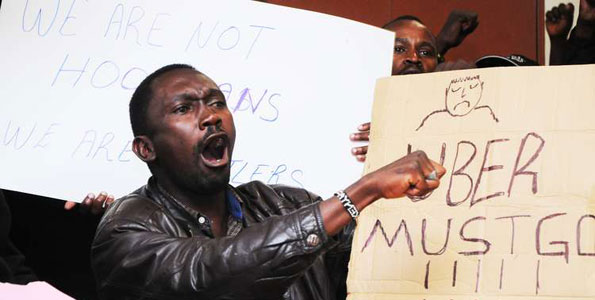 The Uber app, owned by the American company Uber, is a seamless smartphone tool that matches clients with freelance drivers.

The firm, launched in Kenya last year, has gained popularity and notoriety in equal measure, with its users describing it as the best transport innovation, and local taxi associations and critics labelling it a business cannibal and tax cheat that puts unregulated drivers behind the wheel and fails to pay its share of taxes to support the infrastructure it uses.

When the dispute came to a head last week, Kenya’s policy makers were left looking for ways of dealing with the situation.

Transport Cabinet Secretary James Macharia said there is a need to review the sector’s policies to accommodate and regulate innovations.

“We are working on a specific dedicated policy to address the emergence of these innovations and to ensure their smooth regulation. That function falls under our ministry,” Mr Macharia said.

Uber contracts private drivers who use the app and pay the firm a royalty of 20 per cent of revenue earned, but none of the cash goes to the government through direct taxation. This is because the company describes itself as a technology firm, and is therefore not bound by the regulations for public service providers.

“We are a technology platform that partners with existing licensed drivers and operators, and therefore we do not need to apply for any local taxi or public service vehicle licence,” Alastair Curtis, Uber’s international launcher for Africa, said last year.

Taxis operated by private individuals or associations are regulated by county governments and the National Transport and Safety Authority. Taxi operators are required to pay Ksh60 ($0.59) per passenger capacity per month or Ksh2,400 ($24) whichever is higher, as advance tax, before a public service vehicle or a commercial vehicle is registered.

Uber’s business model is replicated in all the countries where it operates, and has become a source of friction between the firm and local operators.

The issue of taxation has stalked the firm with accusations that it is exploiting loopholes to avoid paying the correct taxes. In November, a Fortune magazine article titled Uber’s Tax Shell Game, showed that with more than 60 subsidiaries in the United States and another 75 or more around the world, Uber had created a network of subsidiaries to create a structure for minimising taxes.

Uber says its drivers are responsible for their own taxes as they are classed as contractors with no employment rights and associated employer contributions.

In Kenya, which is still grappling with how to tax informal sector earnings, it is unlikely that the taxi drivers will file returns.

In addition, the new Nairobi County Transport Bill that seeks to regulate taxi services fails to capture innovations such as Uber.

Nairobi County Executive for Infrastructure and Roads Mohammed Abdulahi said that Uber is an enabler app that connects the taxi operator to the client.

“We have never received any application from them to operate in Nairobi. Competition is healthy and the market is big. The taxi drivers need not worry,” he said.

However, Transport Cabinet Secretary Macharia said regulating Uber will make it easier for the government to track its revenue stream and collect what is due to it.

“As an app, we can see its local income stream. This will make it easier for us in terms of enhancing government collection of revenues,” he said.

Peter Mukoya, a tax partner at a local firm, said that if Uber has a branch in Kenya, it should be taxed a non-resident rate of 37.5 per cent.

“However, if it’s not registered in Kenya, the tax domicile is elsewhere, meaning profit shifting and revenue loss for Kenya.”

In Kenya, corporate tax returns are due 18 months after a company’s registration.

If withholding tax applies to Uber, it should be charged at a rate of 20 per cent.

Mr Mukoya said that in the 80:20 revenue sharing plan, the drivers will account for the cumulative income earned in the year, apply the tax rates at the annual Pay As You Earn rates, and declare it to KRA while filing personal income tax returns.

“Uber on the other hand will file tax returns after the concessionary 18 months, or earlier, if it wishes to claim withholding taxes deducted from drivers and pay the balance of tax due,” Mr Mukoya said.

Uber has faced opposition to its services: In South Africa, traditional metered taxi drivers demonstrated against the company last July. Johannesburg held discussions with the Guateng province government, Uber and the local taxi drivers, and new rules were introduced compliance with the local laws.

Through its subsidiary holding company Uber International CV in the Netherlands, Uber Technology is paid 1.45 per cent on future net revenue for the use of the Uber app outside the US, which captures jurisdictions like Kenya.