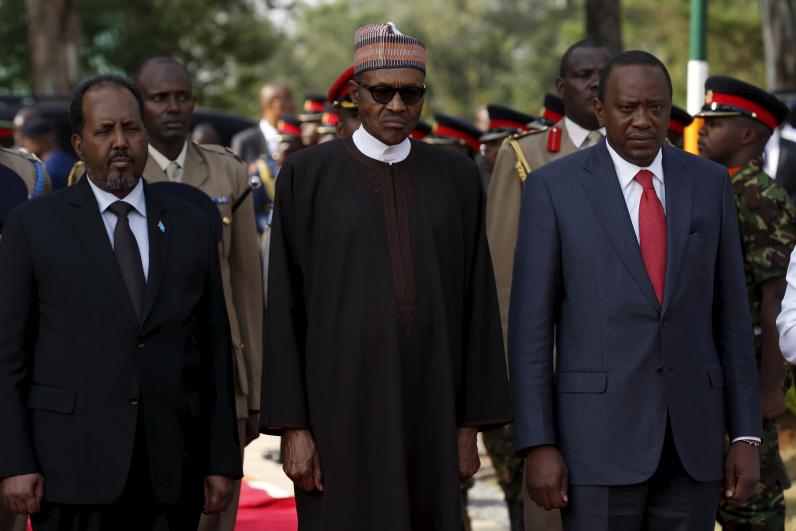 Fighters from the Somali militant group attacked the African Union base at El Adde, in the Gedo region of Somalia and near the Kenyan border, on January 15. Al-Shabab claim to have killed more than 100 Kenyan soldiers stationed at the base, though this figure has not been independently verified and the Kenyan authorities have so far refused to give an exact number.

Kenyatta spoke at a memorial service on Wednesday for the fallen soldiers in Eldoret, western Kenya, which was also attended by Somali President Hassan Sheikh Mohamud and Nigerian leader Muhammadu Buhari. Kenyatta rejected calls from opposition leaders to pull members of the Kenyan Defense Forces out of Somalia, saying that Al-Shabab would continue attacking Kenyan interests whether or not troops were stationed in the country.

“They [those calling for a withdrawal] have forgotten that the enemy has made it clear he will follow us home. And they have forgotten that, as good neighbors, we cannot leave the people of Somalia to the tender mercies of murderous terrorists,” said Kenyatta.

Kenyan soldiers have withdrawn from the El Adde base but remain nearby, Reuters reported on Tuesday, with a spokesman for Al-Shabab claiming the militants are now in control of the base. Newsweek contacted AMISOM for confirmation but no one was immediately available for comment.

The AU Mission in Somalia, known as AMISOM, has been active since 2007 and consists of more than 22,000 troops, over 3,600 of which are Kenyan. The mission has had success in reclaiming Somali territory from Al-Shabab, but the militants continue to carry out guerrilla attacks in Somalia and Kenya. Al-Shabab fighters killed at least 67 people in an attack on Nairobi’s Westgate shopping mall in September 2013, and gunmen from the group murdered 148 people at Garissa University College in April 2015.

Mohamud thanked the Kenyan government for its assistance in tackling Al-Shabab, whose members he described as “barbaric devils,” according to Reuters. Buhari, whose military is fighting Boko Haram insurgents in northeast Nigeria, expressed his solidarity with Kenyatta and urged the Kenyan president not to give up. “We must defeat terrorists, their sponsors and sympathizers,” said Buhari.