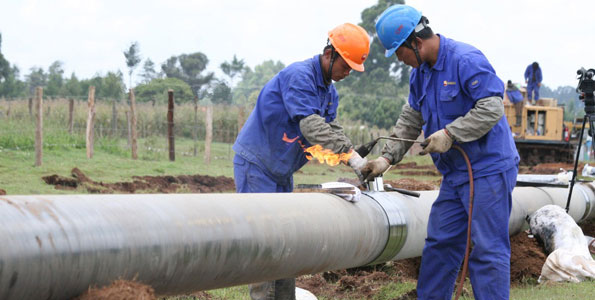 South Sudan is also contemplating an alternative route via Ethiopia to Djibouti instead of South Lokichar in northern Kenya through Isiolo to Lamu on the Indian Ocean.

The rival projects have raised fears of over-investment in oil transport infrastructure given the finite nature of the resource, despite hopes that ongoing explorations will yield more.

This would also have fed on the vast resource from Jonglei state in South Sudan — industry analysts place it at double the combined offtake from Kenya and Uganda — increasing its viability.

“The Lokichar-Lamu pipeline would still be viable with South Sudan on board or if more exploitable reservoirs were discovered in Northern Kenya,” said Patrick Obath, the managing consultant of Eduardo Associates, a sector analyst.

Uganda’s latest decision to build with Tanzania a 1,120 kilometre pipeline from Hoima will take the sheen off constructing the Northern Corridor facility — a key facet of the Lamu Port South Sudan Ethiopia Transport (Lapsset) project.

Tanzania’s President John Magufuli and his Ugandan counterpart Yoweri Museveni’s announcement of the agreement to build the southern route pipeline from Hoima in the Albertine basin through northern Tanzania to Tanga port, caught the Kenyan government by surprise. The decision was made public during the East African Community Heads of States Summit held in Arusha last week.

“We did not receive any communiqué. Kenya and Uganda have signed  a memorandum of understanding (MoU) to construct the Northern Corridor route pipeline after the central crude oil pipeline from Hoima through Kampala to Mombasa port was dropped,” said senior government officials from Kenya’s Energy Ministry, on condition of anonymity.

Tullow Oil Plc, which has interests in discoveries made in northwestern Kenya and Uganda with China National Offshore Oil Corporation (CNOOC), which has a stake in the Albertine basin were not kept abreast of the pipeline to Tanga.

Mr Obath said host governments in East Africa ought to continue making regulatory and legislative reforms to maintain the interest of investors and entice new players to the nascent oil sector.

“Investment is driven by reforms including regulators giving timely approvals for the industry to take bankable projects to the final investment decision stage,” said Mr Obath.

“The partners and the government now have to look at pipeline logistics for Kenya to start exporting commercially viable crude oil from 2020,” said the firm.

It is tied to South Sudan deciding to build a 1,469 kilometres pipeline to Ethiopia and Douraleh port in Djibouti after ILF Consulting Engineers of Germany was contracted in 2013 to carry out a feasibility study.

South Sudan in 2012 signed an MoU with Kenya for feasibility studies on a facility through northwestern Turkana County to Lamu as an alternative to the pipeline to Port Sudan on the Red Sea due to a tariffs dispute.

Hydrocarbons lead consultant Robert Shisoka said Uganda favours the pipeline to Tanga port as one on the northern route could be a soft target for attacks from Al Shabaab-affiliated extremists.

Preliminary data shows production from Kenya, Uganda and South Sudan when combined will lead to a total of 430,000 barrels of crude oil being pumped per day through the joint northern facility.

“Safety of workers and equipment on the northern route led to Uganda favouring of  Hoima-Tanga pipeline,” said Mr Shisoka.

He said reliable supply of electricity will be a key feature of any route selected because the pipeline has to be heated to ensure the oil flows. The oil in Uganda and Kenya is waxy in nature and solidifies easily.

Kenya’s first discovery of oil in South Lokichar basin in exploration blocks 10 BB and 13T was made in 2012. The Lapsset Corridor Development Authority (LCDA) estimates the cost of building an 868-kilometre pipeline from Lokichar to Lamu at $3 billion.

Data from the Energy Ministry and LCDA shows that Hoima was to have crude oil storage tanks of 127,200 cubic metres (m³) and a 24-inch, 583 kilometres pipeline to Lokichar with a peak elevation of 1,430 metres above sea level.

Lokichar was to have crude oil storage tanks of 63,600 m³ and 30 inch, 868 kilometres to Lamu, where the raw fossil fuel is to be stored in 190,785 m³ terminal with a heating station before the commodity is loaded to sea tankers.

Landlocked Uganda’s first oil was discovered in 2006 but the plan for Tullow, CNOOC and Total to start commercial crude production by 2018 is unlikely to materialise due to delays in building an export pipeline to the Indian Ocean.