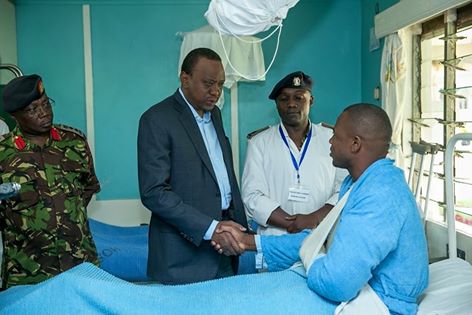 Nairobi (HAN) June 17, 2015 – Public Diplomacy and Regional Safety and Security News – President of Kenya vowed to keep Kenyan forces in Southern Somalia to fight Al-Shabaab militants in Kenya and neighboring area, apparently dismissing suggestions the country may be drawing up an exit strategy in order to focus on attacks on its own soil.

The chairman of the Kenyan Senate`s National Security and Foreign Relations Committee, Yusuf Hajji, signaled earlier this month that an exit strategy was no longer taboo and that Kenya wanted to create “a strategy on how to fight insecurity in Kenya”.

Kenyan defence chief, General Samson Mwathethe, said the military would spare no efforts to drive the militants out of the country.

According to Standard Digial, More than 50 CID commanders were Tuesday moved in changes aimed at enhancing crime management in the affected areas.

The new CID commander for Garissa County is the former head of Anti-Terror Police Unit Boniface Mwaniki while Said Baruk will be in charge of Mandera County and Keri Nyawida will take over in Wajir. The counties in northern part of the country have been badly affected by insecurity hence damaging their economic development.

Director of CID Ndegwa Muhoro announced the changes and moved Festus Malinge from Kisii to Busia County, Francis Kilonzo from Bomb Disposal to Tharaka Nithi County, John Otieno to Nyamira and Stephene Chacha to Muranga. The new head of Bomb Disposal unit is Eliud Langat while Onesmus Towett has been moved from Kwale County to CID headquarters and Amos Teben is the new CID commander for Kisii.

Incidents of violent crimes have been on the rise in the affected areas hence the changes. Muhoro said the changes are normal aimed at boosting their efforts to contain the crimes.

“They are normal changes aimed at ensuring we address some of these crimes that are fluctuating,” he said.

The movement of Mr Mwaniki to Garissa is seen as a strategy to address terror threats that have been on the rise in the region at large. It’s part of changes that have been implemented since April 2 when terrorists stormed Garissa University College and killed more than 150 people , most of them students.

Local police commanders have since been moved and new ones posted there.

Mwaniki is a celebrated anti-terror officer having worked at the office up to last year for five years when he was sent to the National Defense College in Karen for administration training.