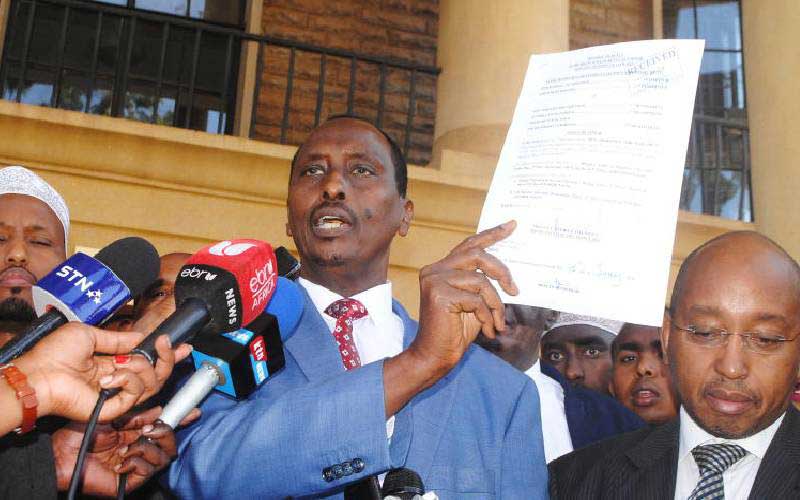 Wajir Governor Mohamed Abdi can smile all the way to his office.His sigh of relief and victory song after the verdict which contrasted the gloom that had engulfed his supporters before the decision showed a man who owed his victory to his team of lawyers led by Senior Counsel Fred Ngatia for managing to overturn what was seen as impossibleThe Supreme Court on Friday overturned both the High Court and Court of Appeal decisions to nullify his win.Four of the Supreme Court judges ruled that the High Court and Court of appeal erroneously assumed they had jurisdiction to hear the case on whether the governor had a university degree, which is a requirement for a gubernatorial candidate.

Chief Justice David Maraga and Isaac Lenaola however gave dissenting judgements holding that the governor’s degree was questionable.“We find and hold that both the High Court and Court of Appeal wrongly assumed jurisdiction on a matter that did not fall under them. We are wondering why the petitioners waited until after the election to question his academic qualifications when it should have been determined before the election,” ruled the judges.

Where it all began

The governor’s troubles started at the High Court where he became the first of the 26 county bosses whose elections had been petitioned against in court to lose their August 2017 seat.

Governor Mohamed Abdi lost the first round of the war in the High Court in a petition lodged by his predecessor and rival in the election, Ahmed Abdullahi.High Court Judge Alfred Mabeya sitting in Nairobi, found that Mr Abdi did not have a university degree and the election was marred with irregularities.Abdi defended himself saying he has two degrees – one in Business Administration and a Post-graduate degree in International Relations. He claimed to have graduated from University of Kampala.However, Abdi failed to appear in court to rebut the petitioner’s claims. “Abdi was not validly elected to the position of Governor and his election is hereby declared null and void,” Judge Mabeya had ruled.

Governor Abdi then moved to the Court of Appeal. Even there, a contested graduation list killed his case.The Appellate court upheld the High Court’s decision to annul the governor’s election after he failed to appear before High Court judge Alfred Mabeya to defend the validity of his academic certificates.Three Appellate judges Philip Waki, Asike Makhandia and Patrick Kiage ruled that Abdi’s failure to appear before Justice Mabeya to give his evidence made his opponents’ case stronger.His rivals testified in court even after filing their affidavits querying the authenticity of his academic papers.According to the judges, he alone could have explained which high schools he attended and the grades he attained.

s“Only he could say what his student number was, who his tutors and lecturers were, what grades he attained and when he graduated. Only he could explain the strange absence of his name from the graduation list for the day the degree certificate he produced related to,” reads the judgment.In the 56-page judgment, the judges said the High Court decision stood because Abdi did not qualify to vie and was validly elected.Governor Mohamed Abdi, a former ambassador then moved to the Supreme Court to save his election.Here, he was allowed to table evidence that he held the requisite academic qualifications to contest the governorship.