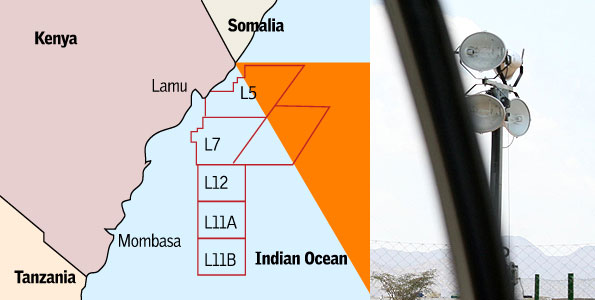 Mogadishu (HAN) October 22, 2015 – Public Diplomacy and Regional Investment Initiative News. Kenya has presented to the UN evidence of what it believes should determine its sea boundary dispute with Somalia. On Thursday, Attorney-General Githu Muigai and his team tabled geographical and seismic data collected for the past seven years. The submission, to the UN Commission on the Limits of the Continental Shelf, is in a bid to prove that the current sea boundary with Somalia should stand. “In preparing the submission, Kenya had to acquire bathymetric data in 2007 and seismic, magnetics and gravity data in 2008, in offshore areas appurtenant to Kenya,” the Attorney-General’s Office said in a statement on Thursday. The presentation to the UN Commission in New York comes just a fortnight after Kenya challenged a case filed by Somalia to the International Court of Justice (ICJ) as invalid. The commission was created by the 1982 Convention on the Law of the Sea. It usually considers data and other material submitted by coastal states concerning the establishment of the outer limits of the continental shelf beyond 200 nautical miles (370km) and to make recommendations. Though Somalia has already sued Kenya on the issue, Kenya argues it wants to know the area in which it will have rights to exploit resources in the sea.

“Kenya stands to benefit from minerals and other non-living resources of the seabed and the subsoil together with living organisms belonging to the sedentary species,” the AG’s Office stated.

Usually, based on what a country presents, the commission’s recommendations are final and binding and Kenya may have to adjust to those recommendations.

Kenya already missed a deadline to reach an agreement with Somalia over territorial boundaries.

Usually, the commission asks countries sharing maritime boundaries to submit to it the orientations and limits of those borders.

Those agreements must set out exclusive economic zones, territorial seas and continental shelves.

Kenya argues that the current sea boundary with Somalia, which takes a perpendicular line to the land boundary into the sea should stand because the Tanzania-Kenya sea border takes the same shape.

But Somalia wants the boundary to extend diagonally to the south at Kiunga into the sea, and not eastwards as it is today.

Somalia went to the ICJ to demand that its boundary with Kenya be adjusted to give Mogadishu a huge chunk of it with significant oil deposits.

The area in contest is about 100,000km2 forming a triangle east of the Kenya coast.

The dispute dates back to 2009 and was influenced by disagreements over resources on the sea bed.

Kenya went ahead to lease oil blocks in the contested area to Total and Eni oil companies in 2012, a decision Mogadishu argued contravened its sovereignty.

There are about 44 oil and gas exploration blocks in or near this area. In 2012, an Australian from PanContinental discovered gas in the Lamu Basin.

The area also hosts a Kenyan navy base at Manda Bay, which is used by US forces in combating sea piracy.

Kenya responded, at the time, by initiating a dialogue that led to a memorandum of understanding (MoU) with the then Somali Transitional Federal Government to negotiate the dispute out of court but with the help of the UN Commission.

However, the Somali Parliament rejected the deal and Somalia went ahead to sue.

In response to the case filed earlier this year, Prof Muigai told the ICJ the case should not stand because it violates trust between Mogadishu and Nairobi.

The AG said the case could jeopardise Kenya’s support for Somalia against Al-Shabaab.

Litigating the complex issue before the court is clearly contrary to the 2009 MoU. Somalia’s case is invalid and Kenya is confident that the court will agree with its submissions, Prof Muigai argued in his response to the case filed in July.

“The two governments must find a solution through amicable agreement, under international law. It is their obligation to do so.”

In 2014, President Uhuru Kenyatta met with his Somali counterpart Sheikh Mohamud over the matter.

But Somalia argued that only the ICJ, a UN court that handles inter-state disputes, would resolve it because the two sides had exhausted all diplomatic channels.

“The issue of the Kenyan government violations against our territorial waters has continued for a long time, so it’s the right time to end its fake claim in court,” Somalia’s Information Minister Mohammed Maareeye argued in July this year.

ICJ verdicts normally do not provide for appeals, meaning Kenya would have to live with the binding decision, which may be losing a significant chunk of its sea territory.

It is for this reason that Kenya is keen to have the matter resolved out of court. theeastafrican