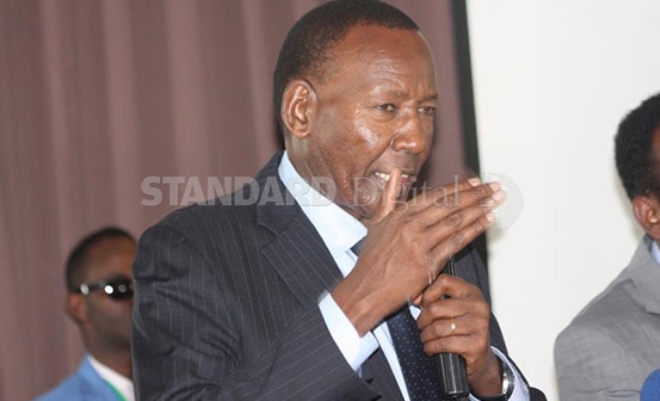 NAIROBI (HAN) April 24, 2016. Public Diplomacy & Regional Security News. The construction of the 700km Kenya-Somalia border fence to bar unwanted persons from illegally getting into the country will continue as planned.

Interior Cabinet Secretary Joseph Nkaissery said the fence will not deter or limit the movement of other people from and to Somalia as perceived.

“This fence will help us check on people like Al-Shabaab from crossing to and from Somalia. We will not limit movement of other people,” he said.

The minister said there will be entry points with immigration officers at Mandera, Elwak, Liboi and other areas down to Lamu to screen those getting in and out of the country.

Designated border points will be have police posts, Kenya Revenue Authority officers and other government offices to provide vital services.

He made the remarks in Nairobi Sunday when he met group of Marehan clan leaders who are here to discuss security issues.

Nkaissery urged for continued support from local clans and especially the Marehan group for both countries to achieve security and stability.

“There is need for joint cooperation from both countries and leaders in dealing with terrorism that has affected us negatively.”

The clan leaders are in Nairobi to discuss how they can help foster stability. The clan has been opposing the Jubaland government headed by president Ahmed Mohamed Islam alias Madobe.

Madobe is expected in Nairobi and will among others be asked to include leaders from the clan in his government as part of efforts to ensure stability and integration.

El-Adde, where Kenya Defence Forces lost more than 80 soldiers in an attack in January is occupied by the Marehan and there has been speculation the clan contributed in the execution of the mission.

Speakers at the meeting called for cooperation from the clan to ensure stability and security.
He said the fence will have CCTVs installed at strategic points and will consist of various obstacles including a ditch and a patrol road for the security agents.

The fence will run across the whole Kenya-Somalia border from Kiunga in Lamu county to the Mandera-Ethiopia border at River Dawa.

The construction has since started and Nkaissery said Kenya is committed its completion.

He did not, however, state how much the fence and the security installations will cost, but said it will keep al Shabaab militants from sneaking into Kenya.

He said biometric data of all those entering Kenya from Somalia will be taken by security and immigration officers stationed at strategic points along the border.

Officers from the National Youth Service are constructing the fence under security provided by the Kenya Defence Forces, Rural Border Patrol Unit and other security agencies.
Al-Shabaab militants have been crossing to Kenya and launched attacks killing and maiming many