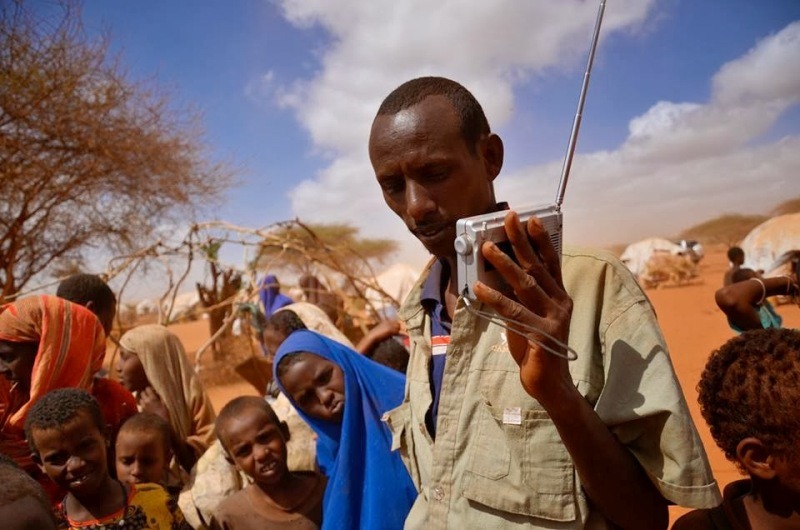 Nairobi (HAN) June 12, 2014 – Somali zones of Somalia, Somaliland and Puntland are suffering from an outbreak of measles that the World Health Organization and the U.N. children’s agency labels “extremely alarming.” UNICEF reported 1,350 suspected cases of measles in March and April, a figure four times higher than the same period last year. Another 1,000 cases were reported in May.

In Somalia, the disease is spreading because of a lack of medical facilities. A measles vaccination costs only about $1, but millions of children remain exposed to the disease. Hunger and bad health add to the problem.

The World Health Organization and UNICEF say a nationwide campaign to vaccinate about 5 million children at a cost of $9 million needs to be conducted to prevent thousands of avoidable deaths.
In Somalia, the belief that treatment should be delayed sometimes causes rifts inside families. Halimo Hussein brought her 4-year-old girl into the hospital after defying her husband’s order to keep her child home for at least a week.

“I’m here against his will,” she said. “He even threatened me with divorce for defying him.”

Nairobi (HAN) Press Relaese, UNHCR – in northern Somali region of Kenya, a community radio station funded by UNHCR is working to help struggling refugees at camps in Dadaab, attracting donations from across the globe and support from the local population.

The UN High Commissioner for Refugees ”In a short period, Somalis will not be in a  refugee camps.”

One story in particular, about an older Somali woman called Timiro Idow, has touched hearts everywhere, thanks to the efforts of station reporter Abdinasir.

Timiro was found stranded in the streets of Dadaab, a town 10 kilometres away from the Ifo 2 camp where she lives. Tired and scared, with one daughter and six grandchildren back home, her plight was brought to light by Abdinasir, whose radio show aims to highlight the daily struggles of the hundreds of thousands of people living in the world’s biggest refugee complex.

Abdinasir went to Timiro’s aid, amazed that she had managed to walk all the way from the camp to the town. “She could not even speak,” a station spokesperson revealed, “but later when we made her comfortable, she began lamenting that life back in the camps was getting too tough and she was not willing to go back unless she was given better food supplies and a good house.”

The determined grandmother told Abdinasir: “I am now old. I have repeatedly urged my daughter to take me back to Somalia, but she has not taken any action. At my age I need to be at home, not in camps where there is nothing.”

Profoundly moved, Abdinasir took to the airwaves, recounting Timiro’s struggle and sharing it through social media platforms. The response was overwhelming. It took just two days for Timiro’s daughter to trace her and donations to start pouring in.

A non-governmental organization based in Kenya’s capital of Nairobi led the charge, with a donation of US$300, as well as a promise to continue supplying Timiro with food and pocket money. Further afield, concerned well-wishers from the United Kingdom and Canada have also been sending money for her upkeep.

Today, Timiro and her loved ones are living in a better shelter as they await construction of their new house. Her daughter, who has lived with Timiro since 2011 when they fled conflict and famine in Somalia, says the donations are helping them a great deal. “UNHCR usually provides us with food and other relief items but it’s never sufficient. I am so happy that Abdinasir’s efforts have helped my mother. I can now concentrate more on raising my children.”

Meanwhile, Abdinasir continues to raise awareness of those in need. As a Kenyan whose hometown has hosted refugees for 23 years, he is finally achieving his dream. “Whenever teachers in school asked me what I wanted to do in my adult life, I told them I wanted to help refugees,” he said. Now, with the help of UNHCR, his radio show known as gargaar, a Somali word for “support,” does just that.

And at last Timiro has a smile on her face. For this granny from Somalia, living in a Dadaab camp, she has never felt as lucky as she does today. Sources: UNCHR Pres release By Duke Mwancha in Dadaab, Kenya

In 2013, UN High Commissioner For Refugees visited In Mogadishu