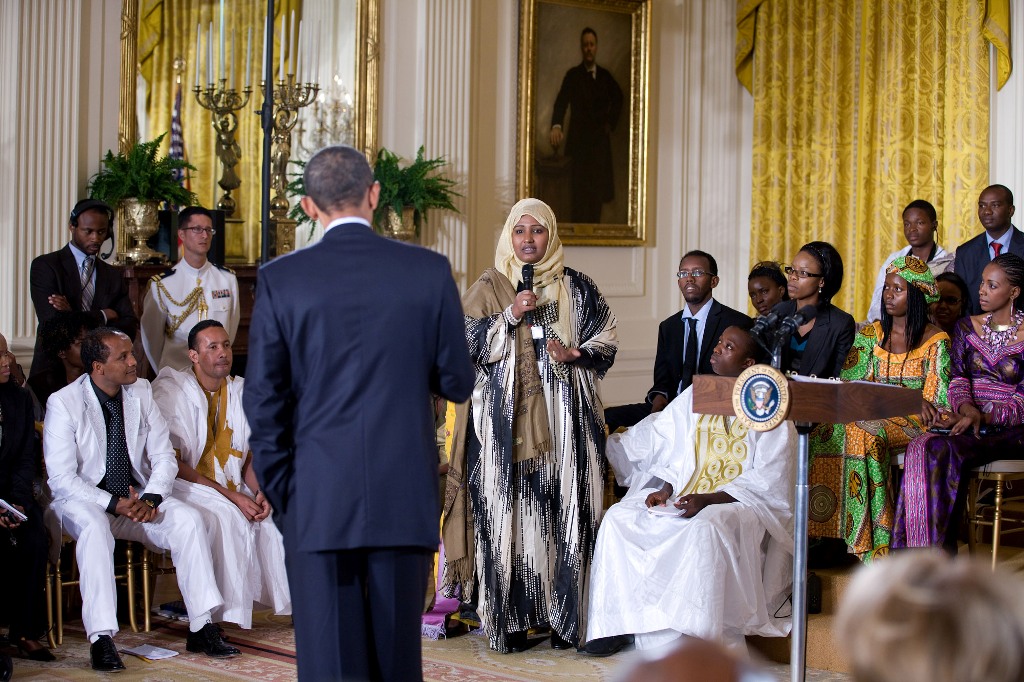 Nairobi (HAN) September 18, 2014 – Public diplomacy and regional security news alert. By Fatima Najma.  Somali Diaspora are Still Bleeding in Uganda. A few weeks ago, I embarked on a journey to Kampala, Uganda, with 30 media professionals for a 5-day media and reconciliation conference. With a luxury resort booked on Lake Victoria, we were all excited at the prospect of discussing media related issues in the most idilic settings.

As a British Citizen, naturally, I followed the queue for ‘Other Nationalities’ and ‘Visas’. As I approached the counter, I was stopped by an immigration officer who asked to see my passport; he took a look at it and told me that I needed to go to an area where a large group of Somali nationals were congregated. I noticed that other British citizens and people with other western passports had passed through without a problem.

I approached another immigration Officer for a second opinion, and again I was told that I was required to go to the other area and fill in an extra form, which was exclusive for people of Somali ethnicity. I asked why this was the case since I was traveling with a British passport. I was abruptly ushered away and told I would find out when I got to that corner of the room. My colleague, a Somali-American was also told the same. When he questioned the immigration officer, he was told “yes you have an American passport but where are you reallyfrom?”.

According to the British Foreign Office guidelines on British nationals visiting Uganda, I can obtain a visa at EIA for a visit ranging between 2 weeks to 3 months.

After waiting 3 hours we were told we had to pay an extra fee which accompanied the extra form, which only ethnic Somalis were required to complete. We filled in the form but refused to pay the extra charge as we did not understand why we were being asked to do so and no one could provide us with the information. We were then told that we were required to arrange for our host in Uganda to collect us from the airport. By this point it was 12am and after an hour or so of two and fro, another immigration officer came to collect our passports, leading us to believe that were being rejected entry and arrangements would be made for us to board the next flight back to Nairobi, Kenya.

That did not happen.

When my American-Somali colleague and I asked where our passports were and requested to have them back, the duty immigration officer told us “they are our property now, we own you”, he chuckled and walked away from us.

I called the British High Commission in Kampala and my call was forwarded to the Foreign and Commonwealth Office (FCO) in London. The duty immigration officer in London called Entebbe airport immigration on my behalf and was told they were dealing with the matter and were in touch with their foreign office.  No further explanation was given as to why I was denied entry and kept at the airport for a lengthy period of time. The immigration officer at FCO kept in constant telephone contact with me throughout the night but was unable to reason with the immigration officers in Uganda and after a while they stopped picking up her calls.

That night we slept at the airport in a small, cramped room for transit passengers.

All through the night, we witnessed Somali nationals being mistreated, elderly women lying on the floor, children sleeping on the hard concrete, being spoken to in the most inhumane ways.

According to Ugandan immigration regulations, people of Somali citizenship can obtain a visa upon arrival if they meet the criteria for entry, otherwise they will be sent back to their country of departure.

My colleague was asked by an 87 year old Somali lady of Kenyan citizenship to translate on her behalf. She explained, “I have been sitting here for 8 hours; I have given my papers and paid for the visa, as well as an additional $20, which I was asked to pay. No one is telling me anything. They won’t even provide water or somewhere to sit”.

Another lady with 3 small children approached me and asked if I could help her find out what was happening with her visa application, she pleaded, “I am tired, I have been here since this morning and have paid everything I was required to pay and more, they took my passport and no one will tell me anything. I just want to be returned to Kenya on the next flight, if they are going to deny me entry”.

Among those stranded at the airport that night was a young man of 18 or 19 years of age who had applied to study at one of the universities in Uganda. He had his acceptance letter and all the relevant papers yet was kept at the airport overnight because the immigration officers had misplaced his passport. It mysteriously reappeared in the morning and he was granted entry.

The next morning we were visited by the duty immigration officer who told us we were being sent back to Nairobi on the next flight. Our passports were given to the airline staff and we would get them back from immigration at JKIA upon arrival.

At 11am, we were ushered onto a Kenya Airways flight and received our passports at immigration in Kenya. No explanation and no rejection stamp.

The immigration officers at JKIA were equally shocked when I told them what had happened and apologised to me. This was the first time I would receive any sort of acknowledgment of the mistreatment I had experienced.

Having previously worked with the African Union Mission in Somalia (AMISOM), and very closely with the Ugandan contingent forces in Mogadishu, I was invited by several of my Ugandan colleagues to visit their country. I imagined Uganda to be a wonderful place where I would find professionalism and respect. I was thus shocked to receive such a hostile reception at the airport.

There are currently 6, 223 AMISOM Ugandan troops deployed in South Central Somalia (the largest AMISOM contingent), paid roughly an average of $1000 a month for peacekeeping efforts. One would therefore assume that Somalia and Uganda had strong diplomatic relations based on mutual respect and humane treatment of each other’s citizens. What I witnessed at Entebbe airport would suggest otherwise.

I witnessed Somali nationals being treated like criminals and requested to sit around for up to 10 hours, children and elderly ladies congregated on the floor. I saw immigration officers hissing and clicking their fingers at people to move from one side of the room to the other.

Furthermore, I was informed that a number of Somali nationals were asked to pay bribes at the airport to be issued an entry visa. Some paid, others refused.

Since returning to Kenya, I have read numerous articles on ethnic Somalis being refused entry to Uganda and nearly every Somali I have spoken to has told me their own shocking story of the horrible ordeal they experienced at EIA. And all because they are ethnically Somali.

According to a report by Standard Media published in 2013, a Somali athlete was denied entry into Uganda and is yet to receive clarification.  An informant of Somali-Kenyan citizenship told me she travelled to Uganda in early 2013 and was ordered to take off her hijab (head scarf), when she asked for a private room or area to do so, she was told “you are no longer in Kenya, you are in Uganda now and must abide by our rules”.

From my own experience, and my observation at EIA and through the stories of people who have come forward to talk to me, it would appear that there is a system of screening Somalis for the purpose of discrimination, and an apparent ethnic profiling of Somalis traveling to Uganda. What makes matters worse is that there is no explanation or logical reasoning behind this system. If Uganda does not want to receive Somali visitors then it should make it clear in its immigration policy so that we do not waste money on a plane ticket and endure the trauma of mistreatment.

The ethnic profiling of Somalis at EIA is counterproductive to the diplomatic relations between the two countries and may even lead to hostility in the future. It will certainly deter many Somalis with disposable income from traveling to Uganda. After my nightmarish experience, I have no desire to travel to Uganda in the future and I consider myself an avid tourist eager to explore the continent. Source W.Post