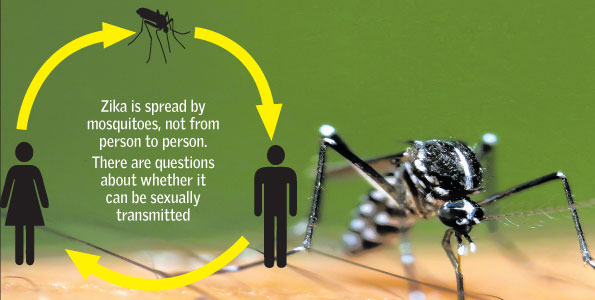 NAIROBI (HAN) February 7, 2016 – Public Diplomacy and Regional Stability Initiatives News. It is unlikely that the Zika virus outbreak being experienced in some South and Central American countries will spread to Africa, even as East African scientists plan to conduct studies to establish whether the virus still exists in the region, seven decades after it was first detected.

Researchers at the Kenya Medical Research Institute and Uganda Virus Research Institute say that with the recent emergence of the disease, the two institutions will separately conduct studies to establish if the Aedes aegypti mosquitoes still carry the Zika virus and if people are silently suffering from the disease unnoticed in the region.

“This is an area we shall start looking into to establish why the Aedes mosquitoes do not transmit the disease to Africans,” said Rosemary Sang, the principal researcher and head of arbovirology and viral haemorrhagic fevers unit at Kemri.

Dr Sang, however, added that since Zika does not spread from person to person, the risk of infection is negligible, meaning there is no cause for alarm.

“The level of risk of infection in Africa is much lower than that in the Americas because the Aedes aegypti mosquitoes have been here for a very long time and cause other related viral infections including dengue fever in the African coastal regions, yellow fever and Nile fever,” said Dr Sang.

These diseases are classified among the neglected tropical diseases found mostly in Africa and Asia.

According to the researcher, Africans may have developed immunity to the Zika virus as a result of their exposure to the many related viral infections.

“It is known that immunity to one virus can protect you from the other virus which could be a reason Africa has not had Zika virus outbreaks,” said Dr Sang.

She said that since 2010, Kemri has been conducting research on mosquitoes following the outbreaks of dengue fever between 2010 and 2013 in Kenya and Tanzania’s coastal regions, but no traces of Zika have been identified. However, no recent research has been conducted specifically to find if the Zika virus still exists in African mosquitoes.

Willy Tonui an immunology expert and chief executive Kenya National Biosafet Authority, conquers with her views saying that the mosquito saliva is protective and because Africans have been exposed to the bites many times, they have created immunity to other viruses.

“The outbreak in the US could be because of the mutation of the Zika virus and because their bodies are not used to the mosquito viruses. With time, they will also develop immunity,” he said.

The Zika virus has appeared in more than 23 countries in the Americas and Europe. It is transmitted through bites from the Aedes aegypti mosquitoes.

The World Health Organisation said that Zika is spreading in the Americas because it is new to the region and people are not immune to it.

“There are two main reasons for the virus’s rapid spread,” reads the WHO statement. “First, the population of the Americas had not previously been exposed to Zika and therefore lacks immunity, and secondly Aedes mosquitoes are present in all the region’s countries.”

The health body has declared a global emergency over the explosive spread of the Zika virus, which has been linked to a rapid increase in birth defects, particularly in South America. The WHO describes it as an “extraordinary event” that poses a public health threat to other parts of the world. But the UN agency did not impose travel restriction as one of the preventive measures.

WHO is also working to curb the spread of the virus by bolstering surveillance of reported cases, setting up labs to run tests for the disease, issuing health recommendations, supporting research and helping countries eliminate mosquitoes.

Last week however, health officials in Dallas, US, said that a local resident was infected with the Zika virus by having sex with a person who had contracted the disease while travelling in Venezuela. The case adds a troubling new dimension to this once-obscure disease that is spreading explosively in the Americas, and is suspected of being linked to hundreds and perhaps thousands of cases of babies with brain damage in Brazil.

Dozens of other Zika cases have surfaced in the US, but they have involved people who became infected with the mosquito-borne virus while travelling to Zika-affected countries. Last Tuesday’s case marks the first report in the current outbreak of someone being infected without leaving the US, health officials said.

The development prompted the Centres for Disease Control and Prevention to quickly issue new recommendations urging the use of condoms to prevent the spread of the virus.

Dallas health officials said they had been tracking the local case for weeks. They said the incident began with a traveller who likely had gotten infected through a mosquito bite while in Venezuela. That person, after returning to Dallas County, had sex with the second person, who soon began having flu-like symptoms and went to the doctor.

Christoper Perkins, the medical director for Dallas County, said the doctor recommended that the patient be screened for Zika after learning the person had not travelled outside the area, and had become sick after having sex with the traveller.

The first human cases of Zika appeared in the 1970s in Uganda, Tanzania, Egypt, Central African Republic, Sierra Leone, Gabon and Senegal and then in some Asian countries including India, Malaysia, the Philippines, Thailand, Vietnam and Indonesia.

In May 2015, the Zika epidemic was detected in the northwest of Brazil in and it quickly spread to other regions of the country. Brazil has declared the highest number of Zika cases ever recorded — between 440,000 and 1,300,000 suspected cases.

Among the 270 recent cases, six of the babies were confirmed to have Zika. In addition, authorities are investigating more than 3,000 suspected cases of microcephaly to see if the babies really do have the defect and if Zika is the cause.

Most of the mothers who had babies with microcephaly were apparently infected during the first trimester but scientists say there is some evidence that the birth defect can occur later in pregnancy.

Pregnant women are being advised to be particularly careful not to get bitten by the aedes aegypti mosquito. Though common in tropical regions, scientists say climate change is making the mosquitoes more prevalent in North America. Public health officials say cross-border migrations accelerate transmission of the virus.
So how can one tell if they are infected?

According to Dr Kevin De Cock, CDC Kenya country director, most people who get infected with the Zika virus rarely show symptoms of infections.

“For the few who exhibit mild symptoms like fever, rash, joint pain and reddened eyes, these last no more than a week,” said Dr De Cock, adding that there is no medicine or vaccine to cure the condition.

He recommends that individuals can protect themselves from mosquito bites using insect repellents and wearing long sleeves and trousers during the day when the mosquitoes are active.

Dr De Cock said that there is a need to conduct studies in African countries to verify if there are any cases of microcephaly, and if there is any link to Zika.

The Institute Pasteur estimates that about 80 per cent of infected people do not develop any symptoms. For the remaining 20 per cent, the symptoms caused by the Zika virus are flu-like.

The institute notes that different types of skin rash also feature among the symptoms. Some patients also experience conjunctivitis, pain behind the eyes, digestive problems or even swelling of the hands or feet. In most cases, the symptoms are mild and do not require hospital treatment.

GlaxoSmithKline is conducting feasibility studies to evaluate whether vaccine technology is suitable for the Zika virus.

Zika is also suspected of having links to a rare condition known as Guillain-Barre, which can cause paralysis and death in extreme cases in adults and children with compromised immune systems.