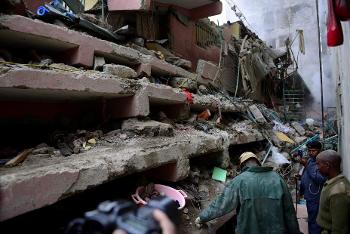 NAIROBI (HAN) May 17.2016. Public Diplomacy & Regional Security News. By Edmund Blair and John Ndiso. Kenya’s authorities tore down a badly built residential block in a poor Nairobi district on Tuesday, one of more than 250 shoddy buildings that could now face demolition after a six-storey structure collapsed this month killing 51 people.

Nearby, residents of another condemned block in Mathare scrambled to wrap up utensils and other items in bed sheets and stuffed plastic bags with clothes as workers ripped out door and window frames to prepare for machinery to destroy the structure.

The Kenyan authorities have identified 258 buildings considered structurally at risk and which could be pulled down, leaving thousands of people to find new homes in a city already struggling to keep pace with its growing population.

“We have tried to find another place to stay but we’ve not been able to,” said Esther Awinja, carrying an infant on her back and hauling her belongings in a sheet out of the entrance where an X sprayed in red paint indicated the block’s fate.

“The only option I have now is to live in another home that is cracking and that is likely to put our lives in danger,” she said, as workers moved in to pull out rudimentary fittings.

Kenyan authorities are stepping up evictions of poorly built buildings after a six-storey block in Huruma district – which lies next to Mathare – collapsed on April 29 after days of rain.

Officials said it had been condemned before it crumbled and said it was not clear why it had not been pulled down.

The death toll of 51 people could have been more if some residents had not seen cracks and fled shortly before it fell.

“For all those buildings that will be found to be defective, the owners will be required to demolish them,” Land, Housing and Urban Development Minister Jacob Kaimenyi said in a May 5 statement. If owners failed to comply, the government would carry out the demolition and bill them, he added.

Yet knocking down dangerous buildings also adds to the housing shortage in Nairobi, which is estimated to have a population of more than 4 million, almost double 15 years ago.

Keeping pace with housing for a growing population is a challenge afflicting cities across Africa, where millions of people every year are leaving the fields and pouring into cities to find jobs, spawning spontaneous and ill-planned new suburbs.

In Nigeria’s sprawling commercial hub, Lagos, a church hostel collapse in 2014 crushed 115 people. A new agency set up to prevent further collapses shows the scale of the problem of bad construction, urging residents not to build on roads, power cables, pipelines and waterways.

Of the 10 million people added to Africa’s urban population each year, about two thirds end up in slums, according to U.N. Habitat, which held a meeting in March in Nigeria about ways to improve living conditions in Africa’s slums.

In Nairobi, 55-year-old community leader Pastor Patrick Lumumba has watched decades of rapid growth in Huruma, where new arrivals from the countryside race to find a roof over their heads and pay little attention to safety.

“They get into houses that are cheap,” he told Reuters, standing on the mound of rubble of the collapsed building last week. “If the house is built badly, they won’t mind, because their main interest is to get a place to live.”

A few streets away, dozens of survivors from the Huruma collapse were camped in a local authority hall as they looked for new homes. Several described how they escaped being crushed.

The downpour that brought the Huruma block down also caused traffic jams that saved Tuitai Perez, 35, who lived in the block but was unable to get home from work before it fell down. His pregnant wife was sheltering at a friend’s with their child, also saving them from disaster.

But Perez, who moved to Nairobi five years ago from west Kenya, could barely afford the monthly rent of 4,500 Kenyan shillings ($45) for his family’s room in the doomed building, and rents have now shot up even further since the collapse.

“I still don’t have a way forward,” he said.

Finding new homes may become tougher still as the Nairobi authorities audit structures. The housing minister said on May 5 that more than 2,600 buildings had been examined, with 226 found to be “structurally suspect” and needing immediate tests. Another official said last week the number had risen to 258.

Officials say demolitions have been prevented or delayed in the past by lengthy legal challenges by owners or intervention from local politicians siding with the pleas of residents.

“Demolitions and other short term legislation are not the issue,” said Constant Cap, an urban planner based in Nairobi. “The long-term solution is to curb mismanagement at the approval level, find out who is approving these buildings.”