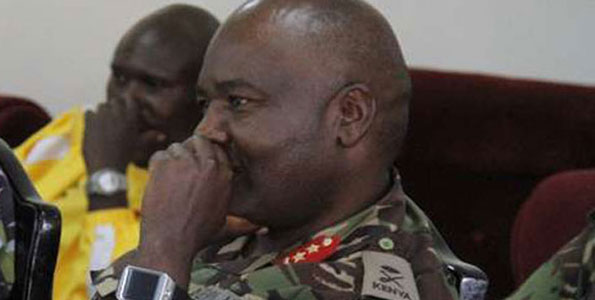 NAIROBI (HAN) November 3.2016.Public Diplomacy & Regional Security News. By AGGREY MUTAMBO. Kenya has rejected the dismissal of Lt-Gen Johnson Ondieki as the Commander of the UN peacekeeping force in South Sudan and announced it was pulling out its contingent.

In a terse statement issued Wednesday evening, the Ministry of Foreign Affairs accused the UN of acting without discussions with Nairobi in sacking the commander who only took the job in May.

“The process leading to this unfortunate decision not only lacked transparency but did not involve any formal consultation with the Government of Kenya. This demonstrates complete disregard of our key role and responsibility in South Sudan,” the Ministry said in a statement.

On Tuesday, UN Secretary-General Ban Ki-Moon sacked Lt-Gen Lt Gen Johnson Mogoa Kimani Ondieki as the Commander of the UN Mission in South Sudan (UNMISS) forces, after an investigation revealed he had failed to protect civilians during the violence in Juba in July.

But the Kenyan government disagreed, saying the responsibility to protect civilians could not be borne by an individual, given the complex nature of the conflict.

The decision irked Nairobi so much it has announced it will no longer contribute to South Sudan’s peace process and will be pulling out the 1,229 troops it sent to South Sudan under the UN, citing “disrespect” from the global agency.

Pulling out of the South Sudan peace process could be significant as Kenya’s President Uhuru Kenyatta is the patron of the peace agreement signed last year between President Salva Kiir and Riek Machar. Indeed, most of the warring leaders live in Nairobi.

On Wednesday, it also emerged that a flexible position by South Sudan mediators to allow rebels to set their camp near a UN base in the country became the spark that cost the Kenyan commander his job.

But Lt-Gen Ondieki, who Wednesday travelled back to Nairobi to meet with President Kenyatta, may have been a victim of flawed structures both within the Mission itself and the power sharing arrangement that allowed Dr Machar to return to government.