Mr Odinga, accompanied by area MP Ken Okoth, condemned the burning of the school, pinning the blame on the Jubilee administration.

The school was damaged during clashes between police and residents, who boycotted the election. 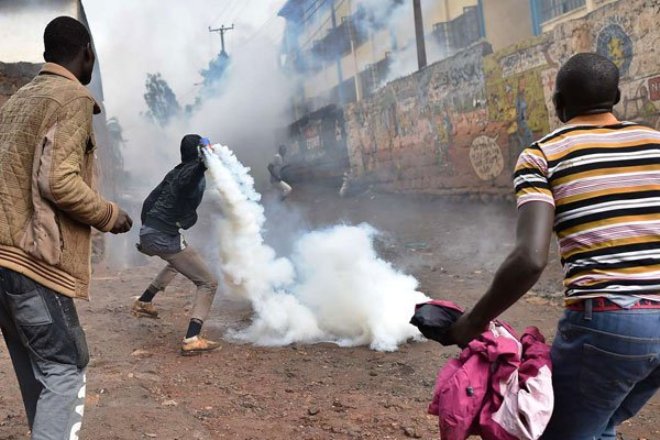 Mr Odinga was nonetheless optimistic that it will be repaired in time for the start of the Kenya Certificate of Primary Education examinations on Monday next week.

“I have come because of the criminal acts committed in Kibra and especially the burning of Olympic Primary School,” Mr Odinga said.
The Nasa leader said he will give his supporters the way forward on Monday next week.

He urged them to remain calm and avoid confrontations with the police.

Mr Odinga noted that the poor voter turn out nationwide was an indication that President Uhuru Kenyatta’s votes in last month’s elections were not genuine.

“Uhuru has been telling Kenyans that he has the numbers. I am asking, where did he get the 8.2 million in the August elections?

“On Thursday, Kenyans heard us when we in Nasa told them to stay at home and not participate in the sham elections,” he said.

He called for prayers at the school before the start of exams.

On his part, Mr Okoth said: “Now see, the pupils have nothing to call classes. This vandalism depict acts of thuggery. They have punished innocent pupils.”

Mr Okoth said that Kenyans are jaded by bad leadership.

The Nasa leader pulled out of the fresh election citing the lack of IEBC’s commitment to conduct a free, fair and credible poll.

“Even if they do what, punda amechoka (the donkey is tired),” he said in reference to Kenyans who are displeased by Mr Kenyatta’s leadership, adding:

“Whether President Kenyatta likes it or not, he will go home.”