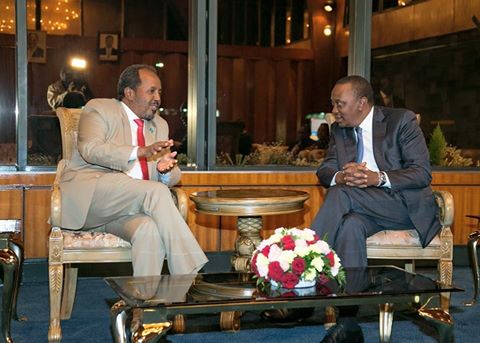 Uhuru said: I jetted back from Tanzania after attending the Emergency Summit for the EAC Heads of State on the Political Situation in the Republic of Burundi. On arrival at JKIA, I met and held talks with the President of Somalia, Hassan Sheikh Mohamoud. The Somali leader had made a stop-over from Abuja, Nigeria where he attended the inauguration of President Muhammadu Buhari.

President Hassan Sheikh returned from Abuja where he attended inauguration ceremony of the recently elected Nigerian president Buhari. During the closed door talks, the two leaders discussed security matters and the threat posed by Al-Shabaab militants to the people and propert of  both nations of Kenya and Somalia, as well as Ethiopia.