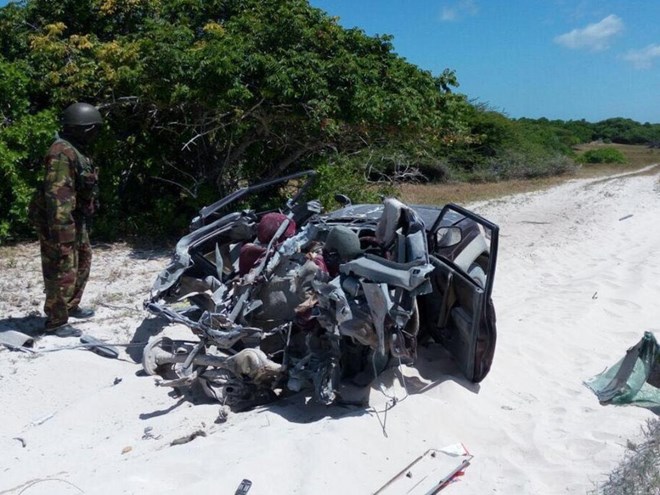 One person has been killed after the TGF car which they were traveling in from Raskiamboni to Kiunga was blown by a IED on Saturday.

Muslim cleric Mohamed Shima who was in the company of a police officer was killed on the spot following the explosion.

The officer escaped with a gunshot wound on his hand.

Raskiamboni is about four kilometers from Ishakani police post within Kiunga, Lamu County.

One terror suspect was arrested and a loaded AK47 rifle recovered.

A source who sought anonymity told The Star that a major crackdown by foreign detectives from the UK and USA are working together with Kenya’s Anti-Terror Police Unit to apprehend the terrorists.

“We have a list and already obtained CDI prints which is very crucial. This is a combined major operation.” he added

Newly posted regional police commander Philip Tuimor could not be reached on phone by The Star but replied with a message that he will call back.

The source also added that the destroyed car belongs to the state and was among those that were recently deployed to the area.

“It is a TGF car and detectives from various security agencies are on the ground carrying investigations,” said the source.