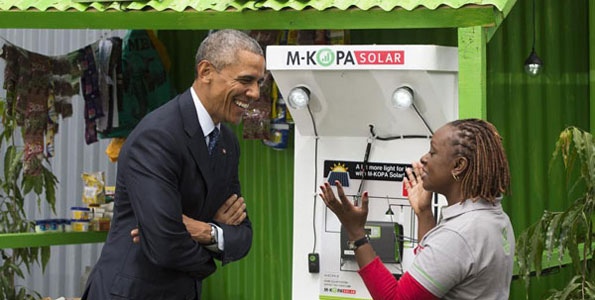 NAIROBI (HAN) February 9, 2016 – Public Diplomacy and Regional Stability Initiatives News. US President Barack Obama signed into law Monday a measure aimed at expanding electricity to millions of households in sub-Saharan Africa, a measure supporters say will save lives and accelerate growth on the continent.

The Electrify Africa Act, which unanimously passed in the House of Representatives and Senate, leverages partnerships with the private sector in order to bring first-time electricity access to some 50 million people in underserved parts of Africa.

Virtually no new US federal funds are allocated for the project, which instead will use a system of loan guarantees to add 20,000 megawatts of electricity to the continent’s grid by 2020.

Access to power is a fundamental development challenge in Africa, and boosting it will stimulate economic growth and improve access to education and public health, the bill’s backers argue.

“It’s a game-changer for small businesses that have to close at dark, and school children who are often forced to study by dangerous, inefficient kerosene lamps,” said House Foreign Affairs committee chairman Ed Royce.

“And too many families resort to using charcoal or other toxic fuel sources, whose fumes cause more deaths than HIV/Aids and malaria, combined.”

The law aims to build on a ‘Power Africa’ initiative Obama promoted during a trip to Kenya in July.

It would see the investment of about $7 billion in US funds, largely financed through the US Export-Import Bank, in order to create 30,000 megawatts of clean energy generation.

Through the plan, “we can make great strides in addressing African energy poverty and promote inclusive economic growth for communities in Africa and at home,” Senate Democrat Ben Cardin said.