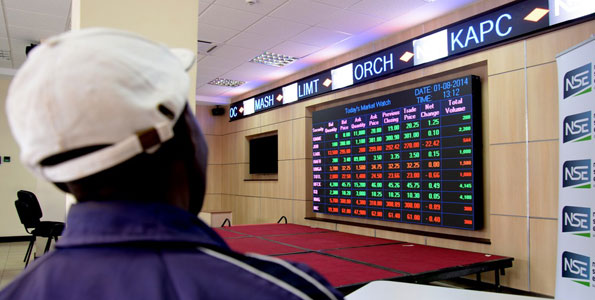 NAIROBI (HAN) January 30, 2016 – Public Diplomacy and Regional Stability Initiatives News. Local and foreign investors eyeing Kenya’s derivatives market will, in the next two months, have the chance to hedge currencies and stockmarkets prices.

The current slow uptake is expected to change as members and brokers take part in the new market.

The Nairobi Securities Exchange said it will open the derivatives market with stocks and currencies up for betting by April.

“It is very encouraging to see that investors will soon start trading and clearing derivative securities through the NSE,” said Geoffrey Odundo, the NSE chief executive officer.

Foreign investors with experience in the derivatives market and businessmen requiring foreign currency are expected to be the main participants.

Derivatives are controlled from a central financial exchange where traders exchange specified commodities at specified prices and times.

Analysts say the market requires an understanding of the risks involved, assessed in the trends of a particular currency, balance of trade of a certain country, monetary policies and inflation.

“It could take up to two years for the investors to understand the market with say Johannesburg as an example,” said Eric Munywoki, the head of research and business development at Sterling Capital Ltd.

Fewer than 10 brokers have applied for the derivatives line, sources said, partly because of the set minimum fee of Ksh100,000 ($980).

“They don’t want to pay the fee for an unknown quantity; they could lose or gain given the trend the bet takes. They are used to the more informal agreements with traders. Banks are already participating in these deals and commission sharing in the new model could scare some,” said the source.

Last week, the NSE announced that six clearing members had already signed up.

“These derivative instruments will initially include stock index and currency futures, and will serve to deepen liquidity in the Kenyan markets,” said a statement by the NSE.

For the stock index market, investors have a chance to bet on share prices for a fixed period of 90, 182 or 364 days. This could however be breached if the investor sees the need to withdraw from the bet, but they will do so at an undisclosed fee.

Investors doing business internationally could hedge the Kenyan shilling against different currencies including the dollar, euro or yuan.

If, for instance, an investor is looking to import goods from China, they could get a consignment from China and pay in six months, meanwhile hedging the shilling against the yuan.

The investor will gain if the shilling strengthens within the speculation period.