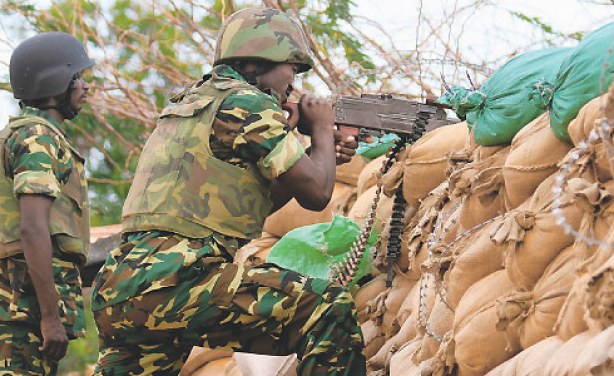 Nairobi (HAN) July 24, 2015 – Public Diplomacy and Regional Security Initiative News – The military offensive against Al-Shabaab is taking place in the Bay and Gedo regions of Somalia, to remove Al-Shabaab elements in southern neighboring regions of Kenya.

“If Uganda and Kenya pulled out of Somalia, we will have not only failed the mandate of the African Union, but also put many people’s lives in danger, including Ugandans. We must keep the African spirit up, Somalis are Africans and are human they have the same blood feel the same pain as Ugandans do. What our soldiers in Somalia need is our support not sympathy.”

The Kenyan and Ugandan fighter jets launched military air raids against Al-Shabaab zones near the town of Diinsoor in southern Somalia, according to security sources. Mayor of Gofgadud district in southern Somalia Ahmed Gadid told media that the aim of the military air raids was to take the villages from Al-Shabaab fighters before a capture of Diinsoor.

“This military campaign is part of a major operation to remove Al-Shabaab from their strongholds,” the Diinsoor mayor said. “Government forces and the African peacekeeping forces will soon enter the town of Diinsoor.” Residents in Dinsoor saw military jets flying down near Diinsoor.

“We saw military jets flying down, and after a few minutes we heard huge explosions,” said resident Mohamed Osman. This comes days after Uganda announced sending helicopters to the Horn of Africa nation to help flush out Al-Shabaab militants. African Union Mission in Somalia Deputy Force Commander of Operations and Plans Major General Mohammedesha Zeyinu said Sunday the aim of the operation, codenamed “Operation Jubba Corridor” is to eliminate insurgents in the few rural areas it still occupies. “

This operation seeks to clear main supply routes to facilitate delivery of humanitarian aid to the population and flush Al-Shabaab from all the said areas, ensuring full control by the Federal Government of Somalia,” Zeyinu said.