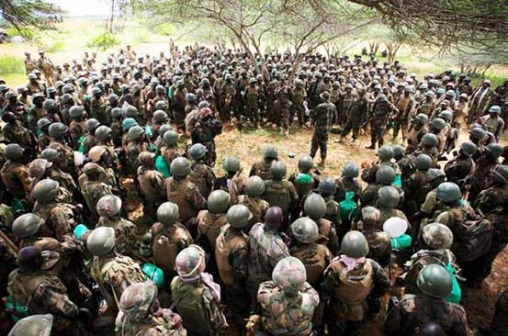 LAFEY (HAN) January 3, 2016 – Public Diplomacy and Regional Stability Initiatives News. By: Kipchumba Some. News that the Al Shabaab has split into competing factions is good and bad news for Kenya in its efforts to combat terrorism in the New Year. Recently, the terror group split – one supporting the blood-thirsty Islamic State, Iraq and Syria (ISIS) and the other supporting Al Qaeda founded by Osama Bin Laden.

While addressing the press last week, Inspector General of Police Joseph Boinett said the Isis-affiliated group is operating in Lafey near the Mandera border while the Al-Qaeda-linked faction is operating in southern part of Kenya and Boni Forest in Lamu County. “They are competing to spread an international jihadist agenda, which could be deadly if and when it happens,” said Boinnet.

In the short term, the split is good news for Kenya’s efforts to combat terrorism wits since the two factions will dedicate more time and resources fighting each other for supremacy, said anti-terrorism expert George Musamali. However, in the long run, the entry of the well-financed and exceedingly brutal ISIS to the region could mark a return to more and well-coordinated attacks in Kenya, he said.

“Isis is the group that any wannabe jihadist wants to join. It is extremely brutal in its tactics, and well-funded. It has drawn the brightest but most devious minds in to its rank and file from all over the world,” he said. He said the reason Al Shabaab joined hands with ISIS is to provide the latter with the much-needed financial lifeline at a time when it is on the back foot. Al Shabab, Al Qaeda’s franchise in East Africa, has been on a back foot in recent times following a string of losses in the territory it holds and the decimation of its top leadership.

It has lost significant ground to African Union forces fighting inside Somalia and most of its founders have been killed in unrelenting drone attacks by the U.S. Consequently, the group has been trying to prove relevance to its supporters by going for soft targets, such as bus attacks in Mandera and elsewhere. Amid these challenges, the group has been unable to execute another signature attack in Kenyan soil, such as the Westgate Mall attack in 2013 or the Garissa University College attack in April. In March last year, ISIS reached out to Al Shabab in a bid to expand its reach and influence beyond its base in Iraq and Syria, part of a wider plan to realization of its caliphate (kingdom).

In October, the leader of Al Shabab in Puntland region of Somalia pledged allegiance to ISIS leader Abubakar Al Baghdadi and declared Puntaland a wilayat (district) of the Islamic State. Unlike Al Qaeda which has been starved of cash Isis has been funding its own operations to the tune of millions of dollars every month through selling of smuggled oil in the territories it controls. Young, intelligent youth from all over the world have flocked to the killing fields of Syria and Iraq, drawn by Isis’ vision of reestablishing the caliphate. The group has withstood the concerted attempts of world powers to destroy it through constant and unforgiving bombing campaigns, a testament to its tenacity.

The police have severally claimed that there are Isis recruiters in the country trying to lure young men, especially college and university students in to the rank and file of the group. In May two cousins, Mohamud Ahmed and Mohamed Abdulswamed abandoned their studies at the University of Nairobi and Moi University respectively and are thought to have joined Isis in Syria. In June last year, the Anti-Terrorism Police unit arrested two Ugandans in Kenya whom it claimed were on a recruitment mission for Isis in East Africa. In August, the Director of National Counter-Terrorism Centre Isaac Ochieng said more than 20 Kenyan youths, most of them students had been driven or directly flown to Syria to join Isis.

Two weeks ago, passengers in bus traveling from Nairobi to Mandera foiled an attempted by ISIS-linked Al Shabab militants. The attackers were targeting Christian passengers. What was meant to be another senseless slaughter of the innocent turned in to a powerful expression of Kenya’s religious unity that could mark a turning point in the fight against terrorism. The attack aborted after a group of Muslims in the bus shielded Christians by refusing to be split and offering them hijabs and headscarves.

Boinnet said there are about 100 militants who are operating in Northern part of the country after defecting and they keep crossing from Somalia to Kenya for attacks before they vanish. “Many Kenyans who joined the terror group are supporting Al-Qaeda faction. They have been pushed by Amisom troops from deep Somalia and they are now operating at the Kenyan border.”