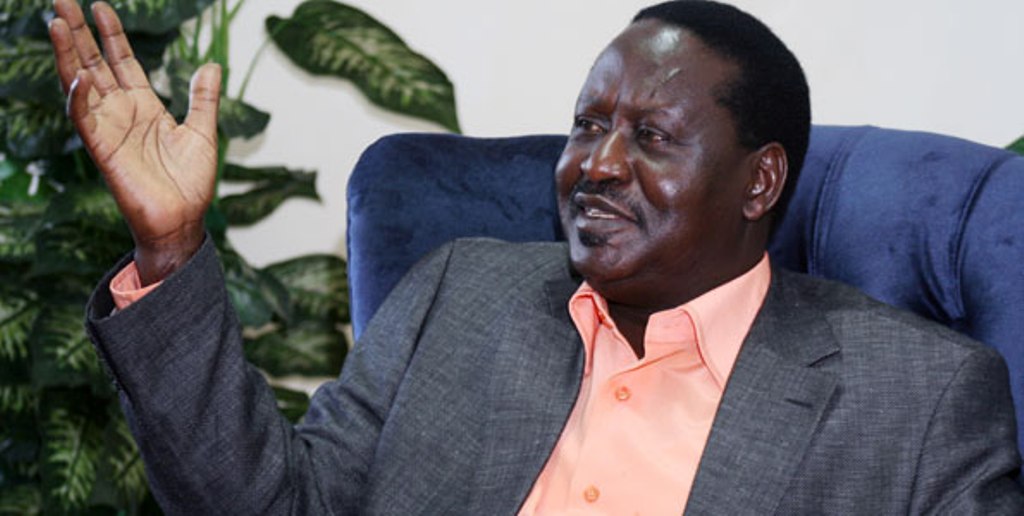 Reacting to Kimaiyo’s order, human rights activist Ndung’u Wainaina termed the order unacceptable and an affront on the Kenyan constitution.

Kenya is facing numerous daunting challenges, including terrorist attacks, a tidal wave of refugees from embattled neighbours, pervasive corruption, and a capital increasingly engulfed by restive shantytowns and slums. Recent attacks resulted in the arrests of thousands of immigrants and refugees, most from Kenya’s ravaged neighbour Somalia.

But Raila Odinga, who has been in residence this spring at Boston University’s African Presidential Centre, believes that with the right leadership, Kenya, rich in natural resources and tourism, could be poised for stability and prosperity. Raila has been taking a breather in the United States, where he has devoted his time to teaching and studying at BU and lecturing at campuses around the country.

BU spoke with the former prime minister at his Bay State Road office about the challenges faced by his nation and the region. 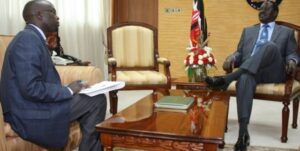 What are the biggest challenges your nation is currently facing?

Kenya is facing serious challenges, especially today—one: high rates of unemployment; two: the cost of living, which is very high indeed. The government has introduced taxation that increases the prices of basic commodities. There is also the cost of transport, and the high cost of rent for housing, the costs of energy, electricity, and so on. So all this is translated to a very high cost of living. Another very big issue is security. There are a lot of terrorist attacks in Kenya—grenades and bombs, robberies, and ethnic clashes. And finally, there is the problem of corruption. That is a very major challenge.

Why is corruption so endemic?

What we know is that systemic corruption is very difficult to fight. You have to strengthen the institutions able to fight systemic corruption. We’ve tried, in our time, but in a grand coalition government it is not one of the easiest things. People take refuge in coalition defenses, in passing the blame.

Is the newly established Supreme Court above corruption in Kenya?

I think the judiciary is facing major challenges. We started with the process of judicial reform, which is as yet incomplete. We had a task force set up to vet the judges and also the staff of the judiciary. Some judges and magistrates have been vetted, but not all. We’d never had a Supreme Court. The highest court was a court of appeals. The new constitution, approved in 2010, established a Supreme Court of seven judges, headed by the chief justice, who is also the head of the judiciary generally. There is an independent commission which deals with hiring and promotion and firing of the staff on the judiciary. In the past, judges were appointed by the president, but that is no longer the case. Now this commission does the vetting.

The biggest danger threatening the judiciary is the encroachment on its independence. We see wars being fought, like Parliament refusing to honour certain rulings of the judiciaries.

What is Kenya’s strategic role in the war on terrorism? Why is a Kenyan military presence in (South) Sudan and Somalia necessary?

Kenya borders Somalia, Ethiopia, Sudan, Uganda, and Tanzania. The entire Horn of Africa is a very strategic area because it is the route to the Middle East. This region has been very volatile, as you know. So we have Somalia, which has not had a democratic government for the last 24 years. And then Ethiopia, which is also having internal strife among various ethnic groups. Then Sudan—though South Sudan attained independence about four years ago, there is still political instability and ethnic strife. Because we border Somalia, we bear the major brunt of hosting its refugees. In fact, before the Syrian crisis started, we were housing the biggest refugee group in the world, about half a million people.

So among those populations, it’s very hard to root out terrorists?

Exactly. So there is quite a bit of terrorist activity within our own borders. There are attacks along the border, or those targeting religious institutions like churches and mosques and even tourist centres. Tourists have been abducted in Kenya, and one was killed. We have to neutralise al Shabaab, the terrorist group that began in Somalia. It’s transformed itself into a militia, conducting raids into certain installations, like the Westgate mall attack in Nairobi. And there have been attacks in the mosques and a recent attack on a church in Mombasa. So this has been ongoing.

What can be done about Nairobi’s widely reported poverty and crime, which has made many Americans afraid to visit?

Terrorist crime is something that is external and that requires international co-ordination to deal with. But then there are crimes that are related to poverty in the country. These kinds of crimes can only be dealt with by improving the economic conditions of the people. And the long-term solution is to first open up the country, because the public sector cannot provide employment to all the country’s unemployed people. You’ll see that if we open up the country, you’re investing in infrastructure development that provides roads, electricity, and water to the rural areas. That itself triggers self-economic activities in some of those remote villages, which helps to create employment. And then there’s the rural-urban migration. People come to the cities, there’s overcrowding, there’s not sufficient infrastructure, there’s no housing, there’s no water, there’s no sewage, and there’s no employment for these people, so this poses many challenges to the authorities. The migrants put up makeshift shelters, so you see the proliferation of slums in the towns, and because they don’t have employment, the crime rate shoots up.

First, we ourselves have seen that the era of aid has passed. Aid has been pumped into Africa for far too long, and we haven’t got much to show for it. Much of this money never reached the intended object or achieved its intended objectives. It actually left this country more impoverished and heavily indebted. So you have now indebted countries, because most of this money found its way back into foreign bank accounts. So we say now the time is not for aid, but for trade and investment. This is why we are addressing the issues—like security—which can make economies more attractive to foreign direct investments.

How do you feel about the vast influence of nongovernmental organizations (NGOs) operating in Kenya and Africa?

I think that NGOs fill a very important gap. They’re doing certain things which the government is unable to do, and they’re mobilising complementary resources. But I believe that in some cases their role is not fully appreciated by the governments in Africa.

Besides tourism, what are Kenya’s economic assets?

There is agriculture—coffee, tea, horticulture, and flowers. Then we have of course the soda ash and new discoveries of coal. There is manganese and oil.

So Kenya should be a rich country.

Yes. We just need to get our act together so that this new wealth which has been found in our country does not become a curse but a blessing. I am very optimistic about Kenya going forward. We have our serious difficulties, we have our political problems, but I see a bright future for the country as we become more tolerant toward each other.

Are there vestiges of colonialism still evident in Kenya today?

What happened when the governor left was that in the place of the governor came the president. But this system remained the same until the new one came into effect after last year’s general election. But now we have two systems existing—one answering to the national government, one answering to the county government. So old habits are dying hard; the old order refuses to yield to the new order. What is happening now is a new generation coming up which is completely unattached to the colonial habits and just now beginning to ask, not why, but why not—why can we not do it in this new way? So the new order is beginning to challenge the old order.

Is that exciting for you?

Very, very exciting. That’s why I keep holding on to the hope, the conviction, that the youth of our country can carry the banner of change for the better.

Kenya has anti-homosexuality laws on the books, but they’re not enforced. Is being openly homosexual a problem, and would the government ever dig its heels in like the government of Uganda has on this issue?

I’ll tell you what. A prominent person came out last year and declared that he was homosexual, and there has been quite a bit of debate about it on TV, radio, and print media and just in general debate. The debate went on and on, and then died. So that’s why we don’t understand what’s going on in Uganda. My view is that in Uganda it is basically a diversionary move to distract attention from serious issues, like term limits, and in Nigeria it’s a distraction from the Muslims and Christians fighting in the north. The presidency wants to gain some sympathy and use this issue to mobilise sympathy and support. The issue of being gay is as old as humanity; it’s in the Bible. In Swahili it’s just called ushoga. It’s an old, old thing.

Would a Kenyan be fired from a job for being gay?

No, no, no. It’s your own business. But it’s something that’s been looked down upon, like witchcraft.

Has President Obama’s Kenyan heritage made any difference to Kenya?

It should have been a good selling point for Kenya, but I don’t think it has given Kenyans an advantage as one might have expected. Maybe Kenya has also by extension inherited some of Obama’s enemies.

Was there an expectation that Obama’s connection would open up the area to a greater degree, make people more willing to invest and somehow connect the two countries in a way?

Yes. It’s really unfortunate that Obama did not come to Kenya last year when he came to Africa. One hopes that he’ll come before his term is up. I would like to extend the invitation to him to come to Kenya. I think it would do Kenya good. He has his grandfather and stepfather here and in their lifetimes they really wish to receive one of their own while he is president.

From your experience here, how informed do you think Americans are about your country?

I think sometimes there’s a fear and paranoia about security in East Africa and Africa generally. I think this comes from the US State Department travel advisories, urging people not to visit what may be a dangerous destination for Americans. But I don’t think that one is safer in Chicago than in Nairobi. And the other issue is security of investments. And I would say that in spite of the weaknesses that exist, I think that the investment climate has improved very substantially in Kenya in particular and in East Africa generally. That fact is not appreciated here in the United States.

Will you run for president again?

It has not been on my mind at the moment. As you can see, I’m busy now doing workshops, speaking, studying, and I’m also teaching African politics, and I spend a lot of time at the library reading.  See more at: Star