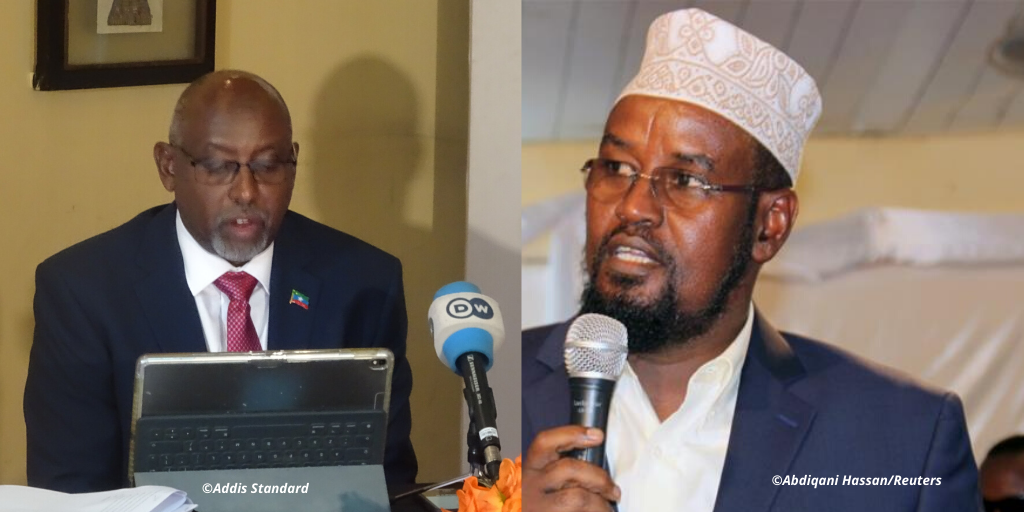 According to our source who wants to remain anonymous, ONLF officials led by Chairman Abdirahman Mahdi Madey, who was elected to the position on November 11, arrived in Nairobi’s Jomo Kenyatta International Airport on Sunday November 24 and were “warmly received by Kenyan authorities.”

Jubaland and ONLF officials are currently holding a meeting off the glare of the media since yesterday, Addis Standard has learnt. The meeting is facilitated, including financially, by the Rift Valley Institute, our source said.Diplomatic tensions between Kismayo and Addis Abeba rose in August this year, in the run up to the presidential election in Jubaland, when its officials refused to allow an Ethiopian plane to land in Kismayo Airport. It followed a decision by Somalia’s central government to deny recognition of the election and its results.

The Kismayo Airport incident also caused a diplomatic standoff between Ethiopia, which supports Somalia’s central government, and Kenya, which supports Jubaland, a buffer zone for its war on terror.

Ahmed Madobe was born in the Ogaden region of Ethiopia and was a one time key security ally (as a member of the now defunct Islamic Courts Union (ICU) he worked closely with Ethiopia until he moved to Jubaland and got himself elected as president in 2013). Relations between Ethiopia and Madobe have since cooled off as Ethiopian officials grew wary of allegations about his involvement in supporting hostile elements.

In an exclusive interview with Addis Standard published in August this year, Abdirahman Mahdi commented about the Jubaland-Ethiopia-Kenya spat saying the ONLF “would like very much for [Prime Minister Abiy Ahmed], and also the ruling party, to consider the interests of the Somali people in these region regarding Somalia.”

“Kismayo is a very strategic position. And if things change there, it will affect the security of this country. And I believe Ahmed Madobe has so far done a good job to that end. For now, we are not sure that if others come the security issue will be maintained. Our fear is that if we don’t treat this carefully and we meddle things, it will affect the entire region because there are forces that are inimical to the peace in Ethiopia. And I believe Ahmed Madobe is handling that force,” Abdirahman said.

ONLF was recently recognized by the National Electoral Board of Ethiopia as a national party and was issued with a certificate of registration. While in Nairobi, its officials are also planning to raise funds, Addis Standard has learnt