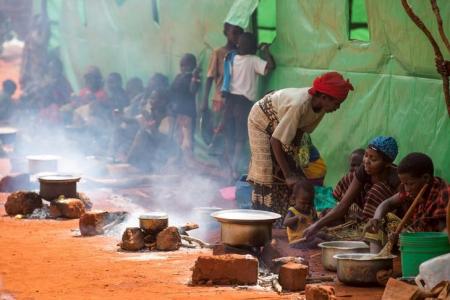 NAIROBI (HAN) February 8, 2016 – Public Diplomacy and Regional Stability Initiatives News. Heavy rains, flooding and a spike in new arrivals could threaten the lives of over 110,000 Burundian refugees in overcrowded camps in Tanzania, six aid agencies said on Monday, amid warnings of rising political tension in Burundi.

Life-threatening malaria and diarrhoea have been spreading in Nyarugusu, the world’s third largest refugee camp, since the rainy season began, and damage caused by a powerful El Nino has left aid agencies short of funds throughout east Africa.

“Refugees are arriving in their hundreds every day,” the agencies, which include Oxfam, Save the Children and HelpAge International, said in a statement.

“Many people are still living in overcrowded mass shelters months after their arrival, where wet floors and cramped conditions mean that the risk of respiratory infections and waterborne diseases is high.”

The agencies also fear a fresh outbreak of cholera, which killed 33 Burundian refugees in western Tanzania in May, as heavy rain sometimes makes toilets overflow and flood shelters.

In April there was an upsurge in arrivals in the camps, which host almost 180,000 Burundian and Congolese refugees, after Burundian President Pierre Nkurunziza made the controversial decision to run for a third term.

At least 240 people were killed and more than 200,000 fled to neighbouring states during the ensuing violence.

Nkurunziza won a disputed election in July, since when there have been violent clashes between protesters and security forces in the capital, Bujumbura, and a series of targeted killings.

“Reports of escalating political instability inside Burundi have prompted fears of a new exodus of refugees into neighbouring countries, which would push the current limits of the camps in western Tanzania to breaking point,” agencies said.

To reduce congestion in Nyarugusu, more than 50,000 refugees are gradually being moved to a second camp, Nduta, some 100 km north. A third camp, Mtendeli, is also planned.

There were mass killings in Burundi in 1993, and the country’s ethnic make-up mirrors that of neighbouring Rwanda, where a genocide took place in 1994.

The current El Niño weather phenomenon is predicted to be the strongest on record, the United Nations says, causing flooding in east Africa, mainly in Kenya and Somalia, that has put two million people at risk of displacement and disease.