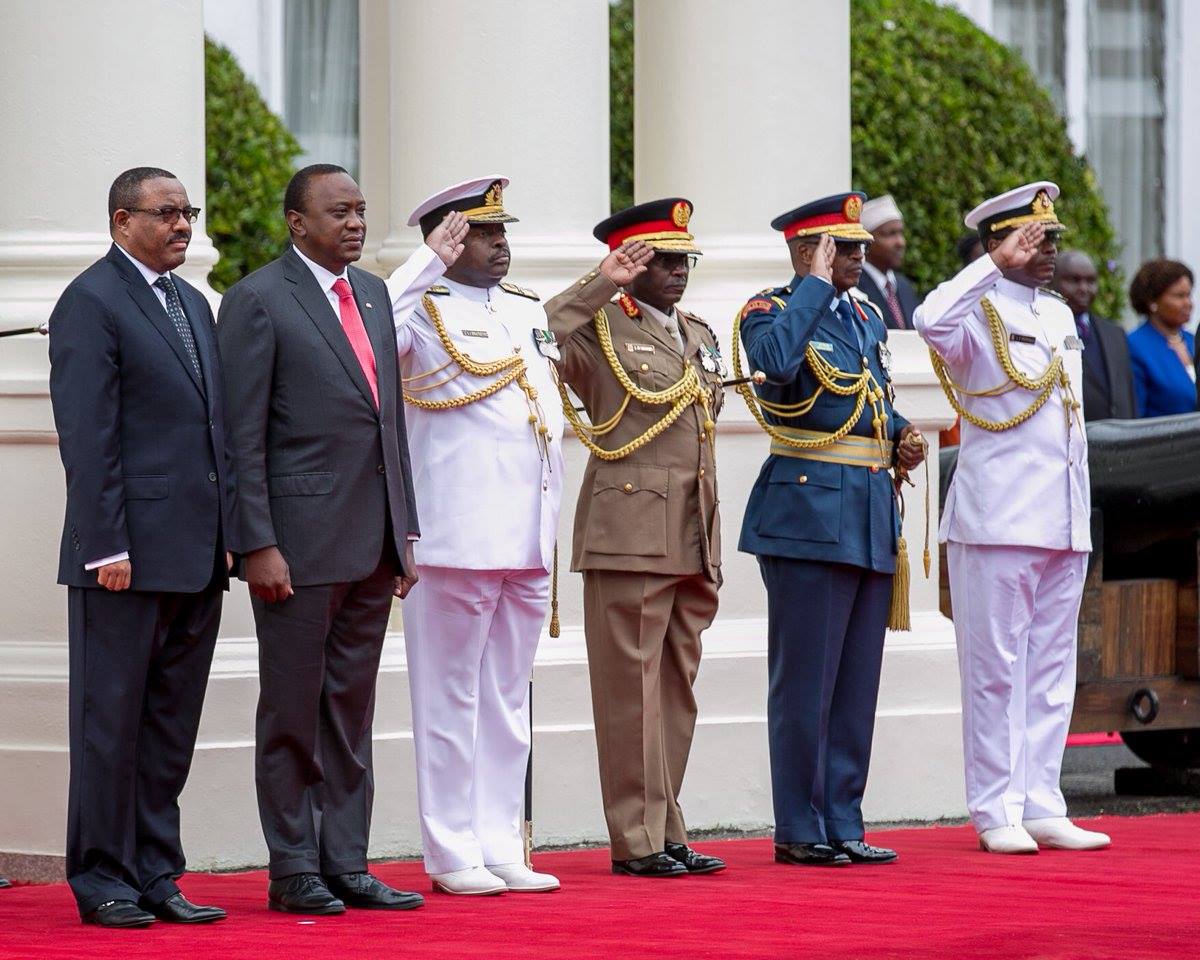 Kenya and Ethiopia today agreed to strengthen the strategic alliance that has existed between them for decades.

The two leaders witnessed the signing of bilateral agreements including a pact on the oil pipeline that will run from Lamu to Addis Ababa under the LAPSSET project.

They also celebrated the successes being made on cross-border security through a Joint Borders Administrators Framework, which they set up last year to deal with anti-peace elements along the common borders.

The brotherly relations between Kenya and Ethiopia are expected to be strengthened through a pact on closer cooperation in sports that will also see a Kenya-Ethiopia Marathon, which on its own is bound to become a world attraction.

The bilateral meeting between the two leaders and their delegation was marked by camaraderie with the two Heads of State referring to each other as ‘brother’.

The Ethiopian Prime Minister, who was accompanied by several Cabinet Ministers, said Kenya is a second home for Ethiopians.

President Kenyatta said Ethiopia was an invaluable partner for Kenya in issues ranging from the economy to regional peace building.

“Ethiopia continues to be a crucial partner to Kenya whose close cooperation on a wide range of critical issues is deeply valued and spans decades,” said President Kenyatta when he addressed a joint press conference.

The President said Ethiopia is working closely with Kenya on the LAPSSET project.

“I thank His Excellency for his continued good will to these projects which promise to bring our people together, while opening up greater opportunities to them,” said President Kenyatta

Ethiopia and Kenya continue to work closely together on matters of security in the wider region and also along their common borders.

“Under our Joint Border Administrators Framework, we’ve seen a lot of success in improving security along the border that we share,” said President Kenyatta.

“We are both committed to actualizing the provisions of a sustainable peace agreement we signed last year, which will reduce the vulnerabilities faced by border communities.”

Kenya and Ethiopia are also working closely together to bring stability and peace to Somalia and the region at large, President Kenyatta said.

“Today provided an opportunity for us to affirm, deepen and expand our historical partnership,” the President said.

On his part, the Ethiopian PM said Ethiopia considers Kenya a strategic partner and a natural friend given the similarities the two countries share.

The PM said Kenya and Ethiopia are important for the stability of the region as well as the whole of Africa.

“Kenya and Ethiopia are the pillars of the region and we have to work together to stabilize the region,” said Mr Desalegn.

He said Ethiopia will always stand ready to support Kenya in all fields and the two countries will become a force to reckon with if they strengthened their ties.

“The African continent expects leadership from Kenya and Ethiopia,” said the Prime Minister.

Before the two leaders addressed the press conference, a joint communiqué was read by the Cabinet Secretary for Foreign Affairs, Amb Amina Mohamed.

The communiqué contained the measures that are being put in place for the two nations to take advantage of the special status relationship that exists between them.

Ministers from the two countries led by CS Amina and her Ethiopian counterpart, Tedros Adhanom, have been deliberating on ways to how to implement and operationalise agreements between the two countries.

At State House, President Kenyatta and Prime Minister Desalegn witnessed the signing of several bilateral agreements between Kenya and Ethiopia.

The agreements included pacts in sectors including oil and gas, health, sports, cross border cooperation in animal health and sanitary measures and field of education.

Tonight, President Kenyatta and First Lady Margaret Kenyatta will host a state banquet in honour of the visiting Prime Minister and his wife Roman Tesfaye.

PM Desalegn is on a three day State visit to Kenya at the invitation of President Kenyatta.