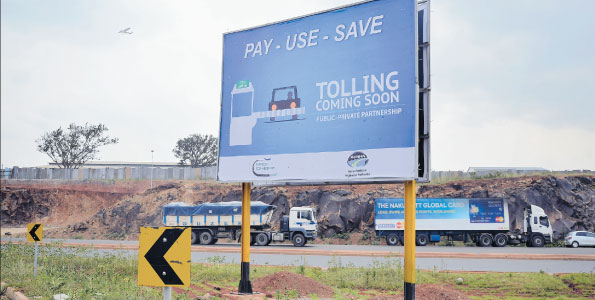 The Kenya National Highways Authority (KeNHA) has erected billboards on key roads, notifying motorists of the intention to introduce user fees commonly known as tolls – to boost the pool of cash it is currently collecting through fuel levy.

The new charges, which amount to a new layer of taxation, are curiously being introduced under a public-private partnership (PPP) despite the fact that the roads have been public funded using tax revenues.

“In the case where the person collecting the toll has not invested in the project, they are merely acting as an agent for government,” said Kwame Owino, the chief executive of the Institute of Economic Affairs.

“In so far as the double taxation debate is concerned, if the toll fee is meant to maintain our roads, then why should we be charged another road maintenance levy?” he posed.

Tolling of roads also raises weighty human rights, equity and fairness issues. It has been successfully argued in many jurisdictions that introducing tolls on major roads without providing viable toll-free alternatives amounts to a breach of citizens’ right to free movement while choosing to charge tolls on particular roads while leaving others free amounts to discrimination of citizens based merely on where they live.

The additional taxation amounts to an extra burden on citizens who have absorbed at least eight major increases in levies in the past two and a half years as the government looks to fund its multi-trillion shilling annual budgets.

KeNHA declined to respond to questions on the proposed charges, arguing that it has not finalised the plan and it would therefore be “premature” to discuss its launch and how it would work.

“I cannot share with you the details since we have not agreed on how many stations we will have and how much to charge. We are still finalising the feasibility study,” said Peter Mundinia, the authority’s director-general.

“Naturally, it will be an electronic tolling system where users pay through a digital platform.”

Roads tolls were initially introduced in Kenya in the late 1980s, but were scrapped in the mid-1990s in favour of the Roads Maintenance Levy to eliminate rampant corruption at the toll stations.