Home frontpage Kenya: Donor fatigue is rising, But Somalia is moving in the right... 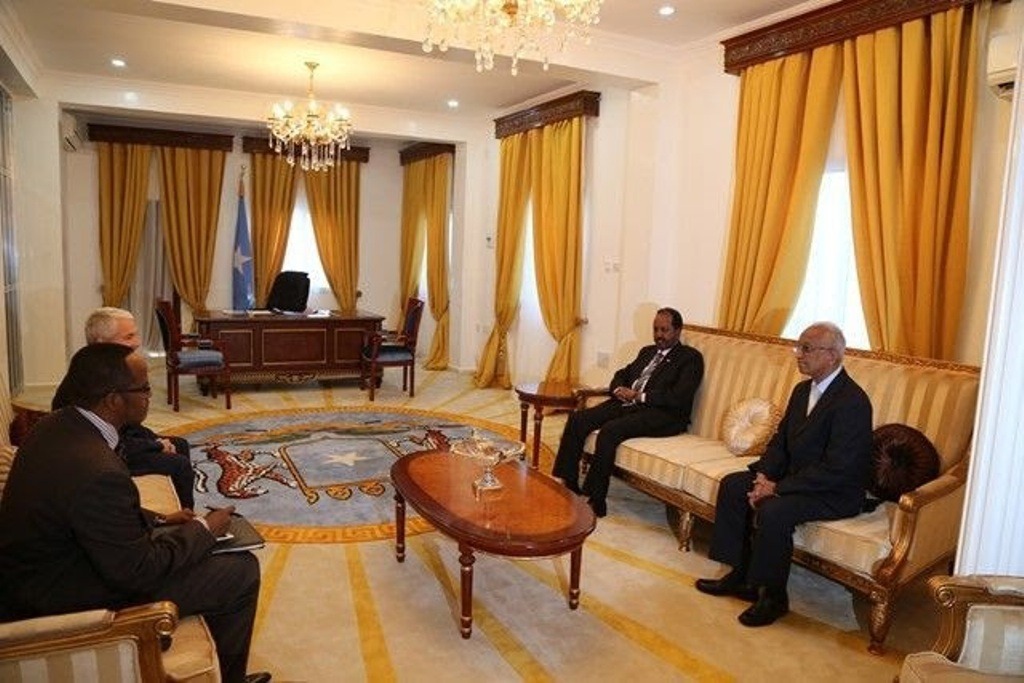 Nairobi (HAN) April 17. 2016. Public Diplomacy & Regional Security News. For the First in 20 years, A military band plays during a parade at the Somali Armed Forces Headquarters to celebrate the army’s 56th anniversary in Mogadishu.

Good update on ‪Somalia Federal Government (FGS) and there’s no doubt Somalia is moving in the right direction, the leadership of FGS has achieves a lots of progress but weakness abound.

Somalia is still fragile, but fragile is progress, Opinion by Muhammad Fraser-Rahim.

For more than two decades, Somalia was synonymous with a failed state − a country controlled by terrorists and warlords, lacking an effective government and beset by recurring cycles of man-made and natural disasters.

No doubt, Somalia remains a work in progress. But as the world’s attention has shifted to other nations on the brink of collapse such as Yemen, Libya and the Central African Republic, Somalia’s quiet progress has made a return to anarchy increasingly unlikely. Today, Somalia, one of the world’s poorest nations, is rebuilding its economy and re-establishing a functioning government.

The influx of international diplomats augurs well, as does the relocation of more United Nations staff from Nairobi to Mogadishu.  The foreign nations who have established strong presence in Mogadishu also provide a sense of optimism and much needed economic revivalism to the capital. Most importantly, the noticeable Turkish and United Arab Emirates compounds provide a necessary public perception of security for Villa Somalia (the president’s compound) and continue to provide optimism for regional and international bodies to stay engaged inside Somalia.

A additional milestone on this journey was passed in January when the Obama administration nominated Stephen Schwartz, a career diplomat and longstanding Africa specialist, to become ambassador to Mogadishu, ending a 23-year lapse. This move highlights how ties between the US and Somalia have strengthened since 2013 when Washington ended two decades without formal bilateral relations.

However, Somalia’s upgrade from failed state to fragile one must be seen for what it is. Somalia remains vulnerable to political, security and economic shocks. There’s a danger that shiny symbols of normalcy like the return of MasterCard Inc. last year − the first by a company that relies on the international payments system − could lead to complacency among donor nations that face other pressing needs. After a quarter-century of conflict, Somalia cannot tackle its reconstruction alone. For progress to continue, it will need sustained assistance −aid that also pushes Somalia’s government and people to assume growing responsibility for their own security and economic development.

Fortunately, that process has begun with a six-year long climb back from the country’s abyss. The successes notched by Somalia offer a glimmer of hope for other nations that today are imploding under the weight of their own violent extremism, sectarianism and factionalism.

What’s behind the turnaround?

A new, indirectly elected and more broadly based government, led by President Hassan Sheikh Mohamud and Prime Minister Omar Abdirashid Sharmarke, has won the confidence of the donor community as well as many of Somalia’s strong-willed and independent clan leaders. Over the past two years, Mohamud’s government has created a viable federal system comprising half a dozen states, pushed forward on development of a new constitution, and worked out initial arrangements for the country’s next elections. (They will be more representative than the previous ones, but fall short of a one-person one-vote standard.)

The new government has also made substantial security gains. Working closely with the African Union Mission in Somalia (AMISOM) and military advisers from several non-African countries, the Somali government has significantly degraded the Islamist militant group al-Shabaab and pushed its fighters to the nation’s geographic margins. Greater stability in Somalia and the semi-autonomous region of Puntland, its cooperative partner to the north, has also contributed to the sharp decline in Red Sea piracy.

Although al-Shabaab continues lethal hit-and-run operations, the Mogadishu government has expanded security in urban areas and broad swaths of the country, helping rebuild the devastated economy and state institutions. The government has re-established full control over Mogadishu’s port, a lucrative source of tax revenue, while the Turkish government, one of Somalia’s strongest partners, has refurbished and expanded the main airport, boosting revenue there.

The improved fiscal situation in turn has supported restoration of some government services. Schools, health clinics, and regional government offices have reopened in most urban areas. Tens of thousands of Somali children are enrolled in an ambitious government plan to increase classroom participation by a million students.

Business is also improving. Turkish investors are moving beyond speculation and have set up new companies that include homebuilding and commercial real estate ventures. Livestock exports, once the backbone of the Somali economy, have also rebounded. 18 months ago, Somalia exported 5 million goats, sheep, cattle and camels to Saudi Arabia and the Gulf. It’s the highest level in 20 years and reflects a general growth in trade between Mogadishu and Riyadh as relations warm between the two governments.

This year, Somalis will head to the polls to elect a new president and parliament. They will also vote on the proposed new constitution. This electoral trifecta could well put Somalia on the path for a future move from fragility to stability.

However, challenges can be expected and certainly remain. The government of Somalia over the past two years has carried out its most successful campaigns of degrading al-Shabaab and its senior leader’s capabilities, and the terrorist group is on its heels more than ever. Yet the Somali military and security services are still heavily dependent on international and regional expertise and are in no way capable in doing it alone.  In addition, donor fatigue and ongoing frustration amongst the international community over what is seen as a culture of corruption remain at their highest levels.

Without organised and structured government institutions that address economic, social and security sector reform to name a few, Somalia will fall back into the same challenges that previous governments faced. In order to put Somalia back on the path to recovery, continued pressure on the Somali government to continue to take ownership of their own state building is necessary.

Somalis will need to be resilient in the face of near certain al-Shabaab attacks aimed at disrupting and terrorising the population. And the armed forces still need to tackle lingering clan and sub-clan rivalries. It will be a long time before Somalia can discard the security umbrella of AMISOM or the large inflows of assistance from the UN and committed donors including the EU, UK, US and Turkey.

But Somalia has changed for the better and its current leaders appear determined to prevent a return to the recent lawless past. With new embassies and business moving into Somalia and continued economic and security advances, Somalia looks like it may be poised to move out of the shadows of war and poverty and into a brighter future.

Muhammad Fraser-Rahim is an Africa programs officer at United States Institute of Peace.