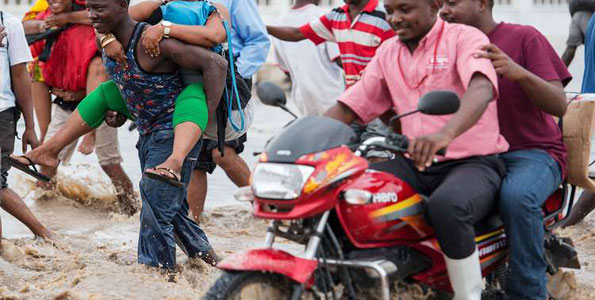 NAIROBI (HAN) December 6, 2015 – Public Diplomacy and Regional Stability Initiatives News. The World Health Organisation is warning that climate change is already causing tens of thousands of deaths every year — from shifting patterns of disease to extreme weather events, such as heat-waves and floods and from the degradation of air quality food and water supplies, and sanitation.

According to a study by WHO’s Special Programme on Research and Training in Tropical Diseases, in Tanzania, poor communities that rely on crops and livestock are seeing their livelihoods and food security wrecked by unexpected weather patterns, such as increasing temperatures, late rainfall onset and droughts. Among the country’s populations most vulnerable to climate change are the Maasai pastoralists living near the border of Tanzania and Kenya.

The pastoralists are particularly vulnerable to the combined effects of climate change and zoonotic diseases (diseases that can be passed from animals to humans) because they live close to large wildlife populations that can act as reservoirs of infection, and compete for access to water and food for their cattle.

“Cattle are the lifeblood of the Maasai tribe. Their milk is a critical source of income and nutrition. However, persistent droughts have reduced pasture growth in recent years, leaving them dry and dusty. As a result, men are taking their herds further and further away to get good pasture,” says WHO.

“The Maasai are migrating to northern Tanzania’s woodlands where large wildlife live and are exposing their cattle to sleeping sickness, which has been dormant for years. Sleeping sickness can dry up the cattle’s milk permanently, and impact the community’s health.”

According to WHO, Human African Trypanosomiasis, or sleeping sickness, is threatening millions of people in sub-Saharan Africa, especially in Tanzania and Kenya, where there are tsetse flies that transmit the disease. WHO says that the Maasai are the most exposed to these flies since they live in remote rural areas and depend on agriculture, animal husbandry or hunting.

Human African trypanosomiasis is a widespread tropical disease that can be fatal if not treated. It is spread by the bite of an infected tsetse fly (Glossina Genus). The tsetse fly bite erupts into a red sore and within a few weeks the person can experience fever, swollen lymph glands, aching muscles and joints, headaches and irritability.

Beyond sleeping sickness, rabies, bacterial infections and diseases carried by ticks are also impacting the Maasai. Yet, these zoonotic diseases do not get much attention. Merging the sciences of the flies, parasites, the environment, water and climate, WHO’s Special Programme on Research and Training in Tropical Diseases, called TDR, is working with the community todevelop solutions.

The WHO study, launched in 2013, through a grant agreement with the International Development Research Centre of Canada is working to identify the safest areas for Maasai to take their cattle. Data collected shows that up to 29 per cent of the flies carry the parasite causing sleeping sickness, but this varies by season and location. However, blood samples from cattle that graze in these areas will show how this translates into infection rates.

To understand vector abundance and parasite prevalence rates, tsetse flies are collected in a wide range of sampling areas during both the dry and wet months, and then identified in the laboratory. Collections are done during the dry and the wet months. Species identification of the flies is done in the laboratory. Molecular tools are used for analysis to identify the numbers of the flies and infection rates.
The Maasai have always known they need to move their cattle away from grazing areas for a period of time so that the grasses can recover. However, more land is being taken over by farms, and expanding populations and wildlife are increasing the competition for grazing areas.

As a result, pastoralists have seen a large number of their cattle die, and their incomes reduced. Source: theeastafrican