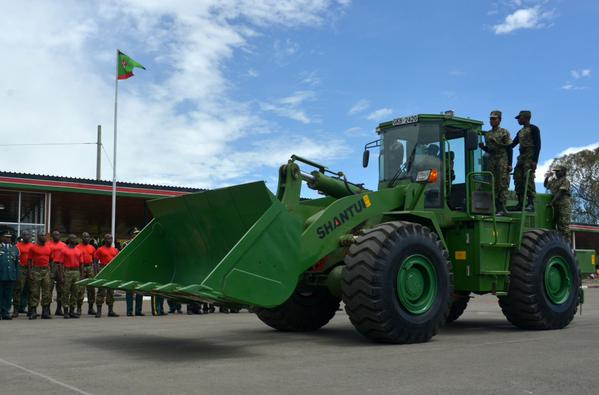 China has provided assistance to revamp Kenya’s National Youth Service (NYS), the country’s premier vocational training institute, under the phase one of bilateral cooperation that concluded five years ago. The Asian nation has agreed to provide equipment for the construction industry during the second phase.

The NYS is a beneficiary of Chinese assistance to provide youth with vocational skills and shield them from anti-social habits associated with unemployment. The loans have been used to upgrade and equip the NYS.

China has mainly provided equipment for training mechanics at the NYS, which has enabled the NYS to upgrade automotive engineering. AVIC International, a Chinese national aero- technology giant, has also been offering training for NYS youth.

The Kenyan leader was speaking during the passing-out parade of 10,736 National Youth Service young men and women from all parts of the country who benefitted from the revised training curriculum aimed at developing patriotic citizens of great social impact and vocational promise.

Kenyatta said the NYS, which is being supported by the Chinese government, was critical especially at this time when the government is keen on ensuring that youth played a key role in the country’s development agenda.

“I note with satisfaction that young people from severely underprivileged backgrounds have had the chance to overcome their challenging circumstances and claim their place in the nation- building project,” Kenyatta said at the ceremony.

Established in 1964, the NYS has been a training ground for underprivileged youth yearning for skills that would guarantee them gainful employment.

The NYS recruits individuals aged 18 to 25 years for vocational training in various disciplines like carpentry, masonry, tailoring, farming and business. There is mandatory six months paramilitary training for the youth recruited in the institution. The youth then participate in nation building activities like roads and dam construction as well as drilling of boreholes. shanghaidaily