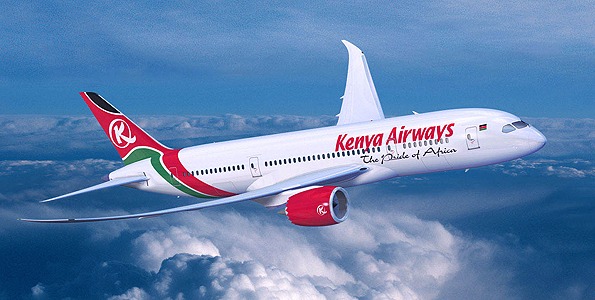 NAIROBI (HAN) December 31, 2015 – Public Diplomacy and Regional Stability Initiatives News. Kenya Airways (KQ) will be hoping to calm headwinds that pummelled its business as it seeks to rebound from record losses and turn around a negative equity position that saw the Senate call for the sacking of its top managers. KQ is barely meeting its financial obligations on expensive loans, is selling off its assets (planes and land) and is also set to initiate a fresh round of job cuts.

Flat revenue growth saw the airline post a Ksh10.95 billion ($107.2 million) net loss for the six months to September up from the KSh10.45 billion loss it reported during a similar period in the previous year. KQ’s total negative equity position stands at Ksh33.9 billion from Ksh5.96 billon in September 2014 as high finance costs, depreciation of the shilling and loan re-evaluation losses vigorously shook its wings.

The national airline will have its work cut out in the New Year, with Mbuvi Ngunze, its chief executive officer, expected to lead the charge. “If I was to turnaround this business and generate a profit of about five per cent, looking at our bottom line last year and excluding one-off adjustments, I need to generate roughly Sh20 billion,” said Mr Ngunze during a recent interview. This was in reference to a 24-item strategy the airline has drafted and which American consultancy firm McKinsey is set to implement over the next one and a half years. The plan includes review of prices, revenue management, sales, cost reduction and cash and financial optimisation among other elements.

By October, the loss-making airline had drawn down half of a Ksh20 billion ($200 million) bridging loan from Afrexim bank. In May, it received a Ksh4.2 billion ($41 million) bailout from the government soon after it emerged that it the firm was paying its workers through debt. But the announcement to watch out for in 2016 is the long-term bailout proposal that the airline is discussing with its two top shareholders. The Kenyan government and KLM are in talks with the KQ management on a long-term financing plan that could give the company the breathing space it needs to stage a comeback. Source: theeastafrican