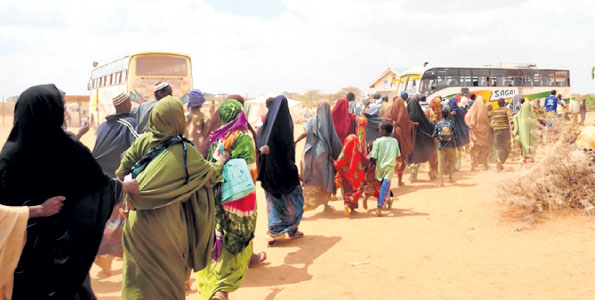 “Repatriation, when it happens, must be in a humane, dignified manner, in line with international principles,” said UN High Commissioner for Refugees Filippo Grandi in Nairobi, at the end of a five-day visit to Kenya and Somalia.

Kenya has vowed to send back 350,000 Somali refugees living in Dadaab in north-east Kenya by November, insisting the camp is a security threat and a drain on national resources.

Nairobi has taken a hardline position, describing Dadaab as a terrorist training ground for Shabaab Islamists, and has publicly and repeatedly said all the Somali refugees would be removed from the country by the end of the year.

But Grandi — who met with President Uhuru Kenyatta on Sunday — said there was room for flexibility.

“The time frame of a few months is very short. I’m sure it will be longer than November, how long I don’t know,” Grandi said. “I hope there will not be a scenario of coercion and forced return.”

Just 14,000 refugees have taken up the offer of voluntary return since the programme began in December 2014, but Grandi said “tens of thousands” more had returned “spontaneously”, meaning without UN assistance.

Grandi said the planned returns would not be conducted unilaterally by Kenya, but in discussion with the UN refugee agency (UNHCR) and the Somali government, and would require financial support from foreign donors to improve conditions in war-torn Somalia and provide a return package of food and money to those who go home.

The vast majority of residents of the sprawling Dadaab complex of camps close to the Kenya-Somalia border fled Somalia’s more than two-decades long conflict. Many remain fearful of returning to a country where insecurity remains rife and life tough.