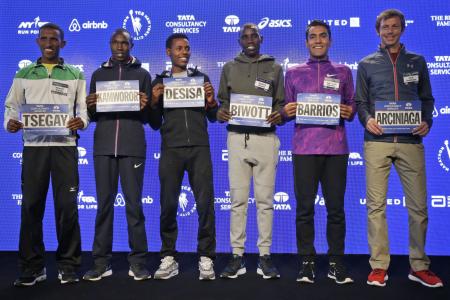 Fourth in London earlier this year, Biwott won in an unofficial time of two hours, 10 minutes and 34 seconds. Kamworor came home in 2:10:48 with Ethiopia’s Lelisa Desisa third in 2:12:10.

Defending champion Wilson Kipsang of Kenya faded to fourth.  Keitany surged to the front for keeps shortly after 18 miles and triumphed in an unofficial clocking of 2:24:25.

The tiny Kenyan quickly broke London Marathon champion Tigist Tufa of Ethiopia in the 22nd mile and ran the remainder of the race alone.

She became the first back-to-back New York champion since Briton Paula Radcliffe won in 2007 and 2008.