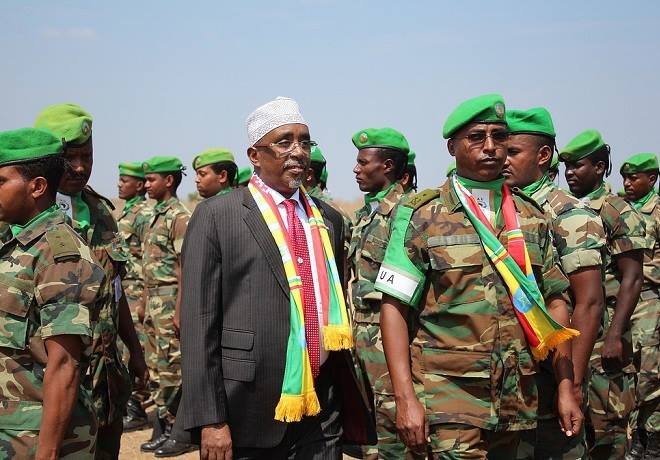 There are other comments and related security and financial comments towards the UN report:

Accountability measures: Family and business ties between those responsible for ensuring the national army is provisioned, and the company providing its dry food rations — amounting to upwards of $8 million each year —suggest a serious conflict of interest, a new UN report said.The new report by the UN’s Somalia and Eritrea Monitoring Group alleged that evidence collected by the Group indicates that the army hierarchy has systematically inflated the troop numbers in order to secure greater funding for salaries and rations.“The almost exclusive use of cash for payments, distinct lack of accountability measures, and absence of any independent oversight has left the army leadership free to exploit Government revenue at the expense of its soldiers’ and citizens’ security.” The report said.

Burhan Dio Mio wrote: Dear brothers and sisters, I was part of the recently concluded three-day NCF marathon in Mogadishu. Allow me to report to those absent to what I have witnessed, especially, the people behind the work – NCF secretariat. People afar may see the pictures and the good speeches only. However, the kitchen behind away from the camera glare where the dough is baked is another thing worth our praise and mention.

I met there dedicated, fearless and committed comrades. Without their hard work, patience and commitment and sleepless nights nothing would have been achieved. They created an open and transparent process that removed any doubt of back room meddling. I saw CAPACITY!

Abdirahman Omar Osman (Eng Yarisow) replied to his facebook page: Absolutely, Burhan Dio Mio I couldn’t agree more with you. We need to have a confidence in ourselves, in our institutions, in our systems and in our leaders, as our unity of purpose is what our country really needs it for this transition period. Viva Somalia

Regional security and safety activities in Kismayo: Somali’s top police officer Mohamed Hassan Hamud and a delegation he was heading yesterday arrived in the Jubbaland city of Kismayu. Accompanied by his deputy and other senior officials, Hamud was received by Jubbaland security minister Mohamed Farah Warsame Darwish and the Police commander of Kismayu Gaboobe Hassan Barre. Sources told Wacaal media that the Commissioner will officially open training for police officers in Kismayu. He is also expected to hand over grants for the local police force to their commanders.