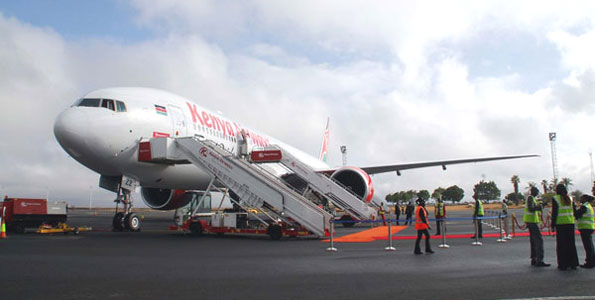 NAIROBI (HAN) April 30. 2016. Public Diplomacy & Regional Security News. By MUGAMBI MUTEGI. Kenya Airways’ flights to Dar es Salaam, Kilimanjaro, Lusaka and Zanzibar were among those cancelled Thursday after the airline’s pilots defied a court order and a pact with management to shelve their industrial action to June 1.

Other journeys that were cancelled included planned trips to Johannesburg, Yaoundé, Jeddah, Entebbe, Addis Ababa and Kinshasa as well as a local flight destined for Mombasa.

Kenya’s national carrier KQ, as the airline is referred to by its international code, also experienced delays on flights to the cities of Lagos, Douala, Kinshasa, Kigali, Amsterdam and Abidjan after some pilots failed to show up for work.

In Kenya, flights to Kisumu, Malindi and Mombasa were also disrupted following the unexpected industrial action which threw the airline into disarray on Thursday and inconvenienced hundreds of travellers.

“We have had some disruptions this morning as a result of the pilots’ strike announced on Tuesday and in spite of our agreement yesterday,” Kenya Airways said on Twitter.

“This (industrial action) is highly regretted and we are working to reduce these disruptions and provide assistance to our guests. We are monitoring and will advise of any changes in the next hour.”

The Kenya Airline Pilots Association (Kalpa), which draws its membership from close to 500 pilots, on Tuesday issued a 48-hour notice to KQ that no aircraft would take to the skies if Mr Ngunze remained in office by midday Thursday.

Kalpa said in its strike notice that Mr Ngunze is unable to lead KQ back to its profit-making days because he, together with his management, are directly responsible for its current financial problems.

KQ’s lawyers on Wednesday rushed to the Employment and Labour Relations Court and obtained an order barring the strike with Justice Nduma Nderi stating that the directive stay in force until May 9.

While court was in session, the pilots were in a meeting with KQ managers and a Cabinet sub-committee that included Attorney-General Githu Muigai and Transport Secretary James Macharia.

The parties agreed to stay the industrial action until June 1 as the pilots and KQ managers deliberated on several outstanding issues and reached an agreement that offered reprieve to customers of the national carrier.

Despite the order and the settlement to defer the industrial action, some pilots still made good their threat to down their tools today, putting them at risk of being in contempt of court.

Mr Macharia, KQ chairman Ambassador Dennis Awori, and Kalpa are currently holed up in a meeting to discuss their grievances.

“We request that you bear with us as we work to normalise our operations and we will keep you updated on the progress,” KQ said on its official Twitter handle.

“We would like to assure our customers and travel trade partners that as the national carrier we are committed to serving you with pride.”