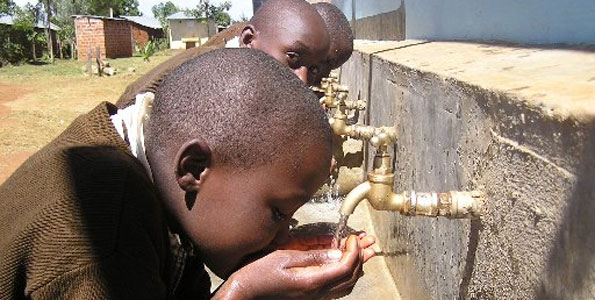 NAIROBI (HAN) December 3, 2015 – Public Diplomacy and Regional Stability Initiatives News. Kenya has signed a $200 million (Ksh20 billion) financing agreement with the World Bank for the construction of a dam at the ongoing climate talks in Paris.

Mombasa County Governor Hassan Joho, who signed the deal along with Kenya’s Water and Irrigation Services Cabinet Secretary Eugene Wamalwa, said the dam would ease a biting water deficit where the county only supplies 46,000 cubic meters to residents.

“This dam will give us surplus water that we will distribute to other counties,” Mr Joho said. This financing is part of a larger project under the Paris Pact Flagship Project that targets to build resilient water systems in cities.

The Paris talks have attracted a lot of international partnerships such as the Lima Paris Action Agenda, which is mobilising large-scale financing to protect the most vulnerable people from the impact of climate change.

Other than the $200 million pledged by the World Bank for Kenya, the financial institution has also pledged a further $2.2billion to go towards conserving the Lake Chad basin which is experiencing serious water stress.

The water body, which once stretched for 25,000 square kilometres, has shrunk to just 2,000 square kilometres today. The French government-affiliated financial institution Agence Française de Développement (AFD) has pledged €50 million to Senegal to go towards protecting at least 300,000 people from the risk of flooding.

Countries currently impacted by El Niño have also been big winners at the talks with the announcement that the European Union will provide $125 million to support the affected in Africa, the Caribbean and Latin America.

The funding is meant to bring life-saving emergency assistance and bolster overall resilience in the affected states. It will combine humanitarian and development assistance to address immediate nutrition, sanitation, health and housing needs.

Extreme climate events such as drought, heat waves, cyclones and hurricanes among others have continued to negatively impacts the most vulnerable populations, threatening their homes and livelihoods.

The Rockefeller Foundation reports that in the last three decades, one out of every three dollars spent on development projects has been lost due to recurring climate related disasters bringing the total global loss to $3.8 trillion. It also noted that 60 per cent of these disasters were water related, hence the need for resilient water systems. Source: theeastafrican