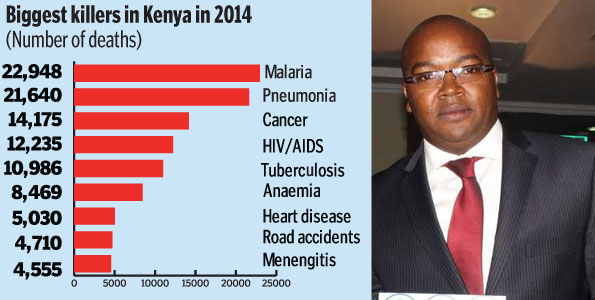 NAIROBI (HAN) February 1, 2016 – Public Diplomacy and Regional Stability Initiatives News. Up to 880 doctors in public and private hospitals in Kenya could lose their practising licences and face criminal charges if investigations confirm that they intentionally misadvised patients to seek treatment abroad in exchange for kickbacks.

It has emerged that the Ministry of Health received reports on the unethical practice last year and launched investigations whose outcome will be released next month.

Health Principal Secretary Nicholas Muraguri told Kenya’s Business Daily newspaper that the investigation seeks to identify rogue doctors who have been colluding with specialists in countries such as India to fleece patients of millions of shillings while draining Kenya’s hard currency reserves.

Dr Muraguri said any doctor found guilty of the alleged malpractices will be stripped of their practising licences and face the risk of criminal prosecution.

“It is really messy. If a doctor of whatever calibre is reported to the medical services board, they will not only be named and shamed but be deregistered for that is a criminal offence,” Dr Muraguri told the Business Daily.

Kenyan doctors are said to have established a network of illicit dealings with foreign hospitals that ensure a regular flow of patients to the facilities even for ailments that can be treated locally in order to pocket the kickbacks.

The doctors are known to pocket up to Ksh200,000 ($1,955) for every referral – mainly of cancer, kidney and cosmetic surgery patients. This adds a huge financial burden on patients because the kickback due to the referring doctor is included in medical bills accruing abroad.

More than 10,000 Kenyans travel abroad each year in search of treatment for various ailments, especially cancer and kidney transplants. The State has narrowed its focus on 880 cases.

Official statistics show that the overseas treatments cost Kenya about Ksh10 billion ($98 million) annually. Kenyans are increasingly turning to India, in particular, for treatment of chronic diseases in the belief that the Asian country has better doctors, advanced medical equipment and charges lower, a position Kenyan officials discount.

“Kenyatta National Hospital (KNH) conducts about 30 kidney transplants a month and some of our private hospitals have capacity for heart transplants, meaning these issues can be managed here,” said Dr Muraguri.

Dr Muraguri said only delicate conditions that local experts cannot treat would warrant overseas care. Kenya has more recently expressed the ambition to become East Africa’s medical tourism hub, a desire that is being undermined by the continuous outflow of patients.

The situation is made even more difficult by the fact that top government officials have ignored the official policy in favour of local healthcare, opting instead for treatment in Europe and the US.

The situation is made even more difficult by the fact that top government officials have ignored the official policy in favour of local healthcare, opting instead for treatment in Europe and the US.

Dr Muraguri said some local practitioners have become money-hungry while overlooking the medical profession’s Hippocratic Oath, which gives top priority to life and welfare of patients.

The Principal Secretary said it had become common practice for medical workers to push the sales of a given line of medicines for their own gain by influencing patients on what and where to buy.

Lobby groups like the Kenya Network of Cancer Organisations have recently raised the red flag over rising cases of suspect referrals abroad.
Medical care in India costs higher than in Kenya, contrary to popular belief that charges are lower in the Asian nation.

“A kidney transplant in India is more expensive than it is locally but it seems Kenyans feel more secure in the hands of foreign specialists,” said Antony Were, the head of Renal Department at KNH.

Indian hospitals charge about Ksh2 million, excluding travel and accommodation that might push the costs above Ksh2.5 million, he said.

Only two public hospitals — KNH and Moi Teaching and Referral Hospital in Eldoret — have the capacity to conduct kidney transplants at subsidised rates.

Patients, however, have to wait for at least two months at KNH for kidney transplants due to the huge backlog. Kenya has over the years grappled with a shortage of doctors and medical equipment that has only added to the push for foreign medical attention.

For instance, there are only 12 oncologists (cancer specialists) and 23 nephrologists (kidney specialists) in the public sector, against a population of about 44 million people. Private hospitals are better equipped and staffed.

Cancer is the third leading killer disease in Kenya after malaria and pneumonia, according to the 2015 Economic Survey. Official data shows that reported deaths from cancer rose from 11,995 in 2010 to 14,175 in 2014.